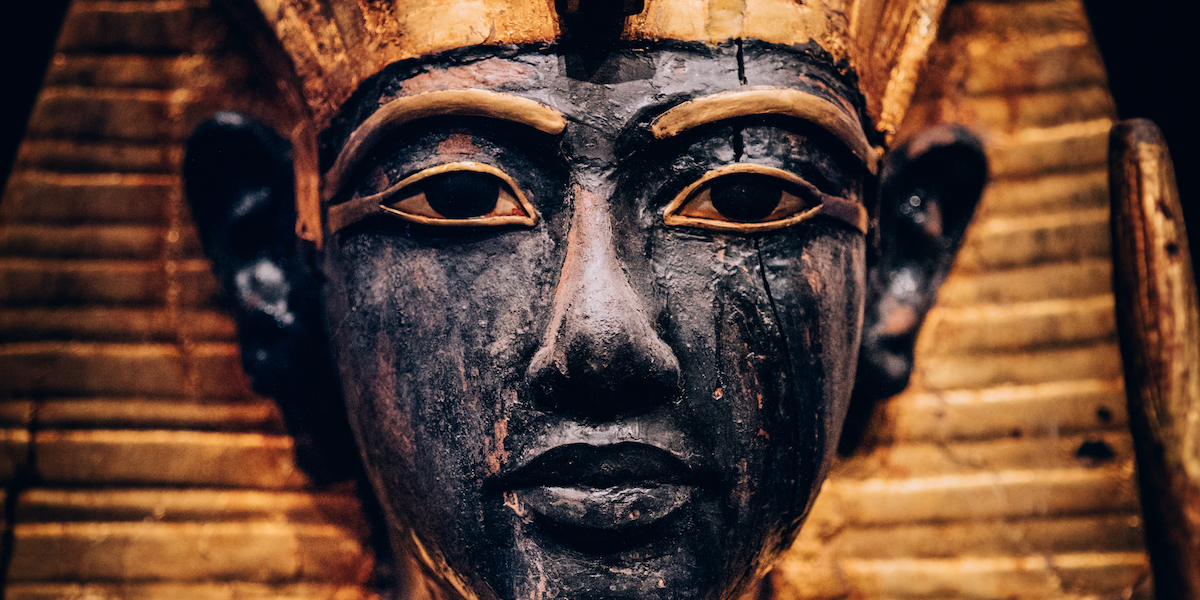 After several fruitless excavations, Harold Carter finally struck gold when he unearthed Tutankhamun’s tomb at the Valley of the Kings, Egypt, on 26 November 1922.

The discovery captured the imaginations of children and adults alike, and continues to inspire many a budding, Indiana Jones. The 5300 objects discovered are of magnificent proportion.

Among the findings were stools, beds, gold and turquoise human and animal figurines, jewellery, ornamented boxes, board games, hunting tools, musical instruments, vases and the Sarcophagus in which Tutankhamun’s mummified body had lay undisturbed for over 3000 years.

150 artefacts from this historical treasure trove are now on exhibit at Tutankhamun, Treasures of the Golden Pharaoh at the Saatchi Gallery in Sloane Square, before being returned to the rest of the collection, at the newly built Grand Egyptian Museum, Giza.

Perhaps, the reason why the golden boy of Egypt continues to capture our imaginations is that he was only 9 years old when he came to the throne. He ruled for 10 years before dying at 19 from a leg injury. Commissioned by Tut to accompany him on his journey to the afterlife, these objects shed light on his short life, and provide intimate observations about the boy behind the gold death mask.

It should be noted that neither Tutankhamun, nor his death mask, are present at the exhibition. Presumably no insurer wanted to take on the responsibility. What is on offer does not disappoint.

White calcite vessels, gold staffs mottled with precious stones, and wooden objects with minute carvings of falcons and cobras, adorn the Saatchi galleries. An exquisite wooden armchair and foot stall made of ivory, gold leaf and ebony, and used by Tut when he was a young boy, brings his young life into perspective from the outset.

The seat is clearly carved from woods seized from foreign lands; it is truly a chair fit for a boy-king. Like many young boys, his gilded wooden compound bow tells us that Tut liked to hunt. He was entombed with more than 77 bows and 400 arrows, presumably for protection on his journey to meet the Gods.

There are several pieces that attempt to show an association between hunting, virility and kingship. A piece showing Tut stood upright on a skiff armed with a harpoon would suggest he wanted to be seen to embody these virtues.

However, it is difficult to reconcile this image with the very personal gilded wooden shrine which has carved images of the boy sat in his chair firing arrows at birds, throwing boomerangs into a marsh, and being helped to walk by his young wife.

Scientific evidence has revealed that Tut had a mild club foot and a fragile constitution, and there has been some suggestion he used a stick for support.

The tiny little senet board game on display, buried with the boy to keep him entertained in the afterlife, offers a much more believable image of how the boy king spent his days.

Over 3,300 years ago, neolithic man accomplished an extraordinary feat in erecting Stonehenge. The scale of this undertaking continues to draw admiration from historians and archaeologists.

Exiting this exhibition, it is almost incomprehensible to think, that at the same time, 2000 miles away, craftsman were fashioning objects of such beauty, that they remain unrivalled masterpieces of antiquity.

Tutankhamun: Treasures of the Golden Pharaoh runs at the Saatchi Gallery until May 2020