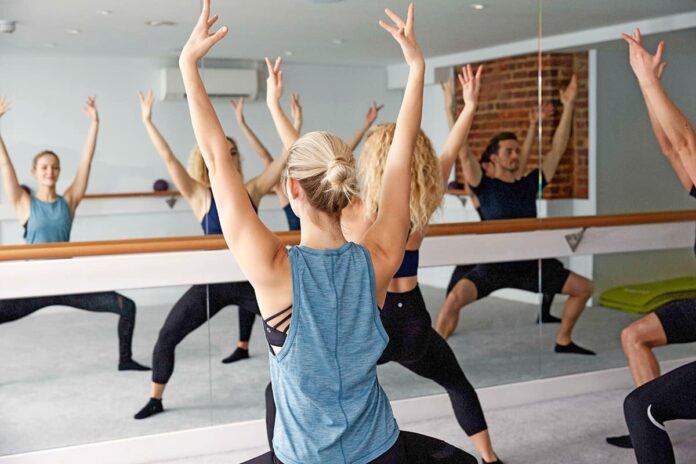 IF the question is: “Do you want Meghan Markle’s…?”, the answer, for most women, is usually ‘yes’. Prince? Obviously. Wardrobe? Definitely. Ability to make the Queen giggle like a schoolgirl at public events? More than anything.

But while the husband on her arm is officially out of our collective grasp, the lithe, shapely limb itself might not be.

Barre workouts are a low-impact way to isolate and sculpt the arm muscles, creating tone and definition without bulking up.

And as the Duchess of Sussex demonstrated when she stepped out of Windsor Chapel, freshly wed and clad in a shoulder-bearing Stella McCartney gown: sun’s out, guns out. So what are you waiting for? Step up to the barre.

Barre workouts use ballet-inspired postures and strength training to “burn out” muscles with high reps of isometric exercises.

The ballet barre is used as a prop to balance while you isolate and contract a specific group of muscles with small range-of-motion movements, working them from all angles.

Traditional barre workouts use body weight and balance to work the various muscle groups, introducing light-hand weights and extra resistance to target areas that are more difficult to isolate.

Barrecore’s ‘Sculpt’ classes builds on this foundation by adding resistance bands to increase the intensity. The bands provide the resistance necessary for functional training moves like bicep curls, tricep kickbacks and shoulder presses, as well as upping the ante on body weight exercises like tricep dips and push ups, restricting the range of motion so the moves are twice as tough.

Exercises alternate between upper and lower body, with high reps that work the muscles to failure. This means you’ll often find your limbs quivering uncontrollably in some of the more intense sets of the class – go with it. Stretches and a few yoga poses in between sets lengthen the muscles and create long lean limbs.

Gemma Bass-Williams, trainer at Barrecore, says arms are “one of the most stubborn areas to work with”, but barre is perfect for isolating specific areas like the biceps, triceps, deltoids and shoulders as well as getting deeper into the stabilising muscles that hold them together.

These smaller muscles work to ‘tuck’ everything in, creating a leaner silhouette.

Because you’re using the barre or the floor as a counterweight, the muscle you build will be proportional to your natural body shape, rather than adding bulk, which can happen if you’re using free weights.

Sculpted muscles aside, Barre also improves your flexibility and brings your posture into better alignment so you appear taller and move more gracefully.

Best for working: Tops of shoulders, triceps and upper back.

How to do it: Stand with arms stretched straight out to the sides at shoulder height. Make a small bend press movement with your arms on a horizontal plane. The smaller the movement the harder you’ll work. Repeat 30-40 times.

Extra challenge: Add leg lifts at the same time as working your arms for a full-body burn.

Best for working: ‘Bingo wings’ with added core work from the Can-Can movement.

How to do it: Sit on the floor with your knees bent, hip-width apart, placing your hands under your shoulders (fingertips pointing forward). Pull one knee into chest. Bend elbows back as lifted leg extends toward ceiling, then press your elbows straight as the knee bends back toward chest. Repeat 15 times, then switch legs.

Extra challenge: Straight leg Can-Can. Start with a straight leg up toward the ceiling and stretch your leg straight forward (even with lower knee) as arms move straight, then move leg back to a vertical position when arms bend.

Best for working: The entire arm, it will be sculpted and lengthened.

How to do it: Holding a 1.5kg to 2kg weight in each hand (water bottles work, too), kneel on the floor with knees six inches apart. Keep tailbone tucked under and abs drawn in as torso ‘hinges’ back, so there is a diagonal straight line from knees up to your head.

Bring your elbows in to your ribs and arms at a 45-degree angle so you can just see your fingers in the corner of your eye. Press weights out in front (just a couple inches) twice, then extend both arms straight once. Repeat sequence 15 to 20 times.

Extra challenge: Add a small tuck of the tailbone with each arm movement.