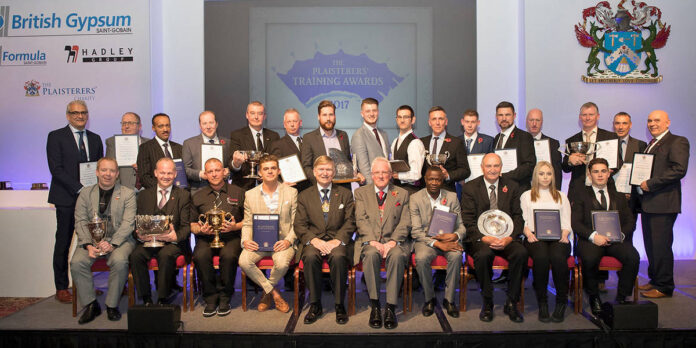 LIVERY companies are well versed in how to keep their historic institutions alive and well in the modern age – and the Plaisterers are no exception.

For nearly two decades the company has been recognising the delivery of excellence in training programmes for plasterers plying their trade in 2017.

And on 7 November members were joined by Dr Andrew Parmley in one of his final acts as Lord Mayor to honour those who have excelled in their education, as well as those who have passed down the tricks of the trade.

The big winners on the night included Student of the Year Yagoub Mohamed, Apprentice of the Year Joshua Street, and Lifetime Contribution to Training award recipient Chris O’Connell.

“One of the great things about the livery movement is your commitment to supporting the next generation of professionals in your chosen trades,” said Dr Parmley as he united winners with their gongs.

“The Plaisterers are a shining example of this… I’m told that today’s ceremony will undoubtedly become the Oscars of the plastering world! Of course it is only right that you invest heavily in training a new generation of master craftsmen and women as your trade is far, far more technical than people realise.”

“When you mention plastering to people on the street they do not think of the magnificent works of art that surround us in your hall, and in the countless Grade I-listed buildings, including Mansion House, across the country.”

The Worshipful Company of Plaisterers obtained its first Royal Charter from Henry VII in 1501, and has been actively involved in the plastering trade since the middle ages, particularly in respect of training and standards.

Master Plaisterer Richard Hanney said that now more than ever he and his peers were committed to their ancient trade.

“We want it to survive and flourish for ever,” he said. “On the basis of this year’s entries we can be very optimistic.

“This year’s awards have seen the highest ever number of applicants for the prestigious Student of the Year award, where the learner’s journey is so important.

“We are also delighted with the success of the Apprentice of the Year prize in its inaugural year. My congratulations [go] to all participants. You can be justifiably proud of your achievements.”