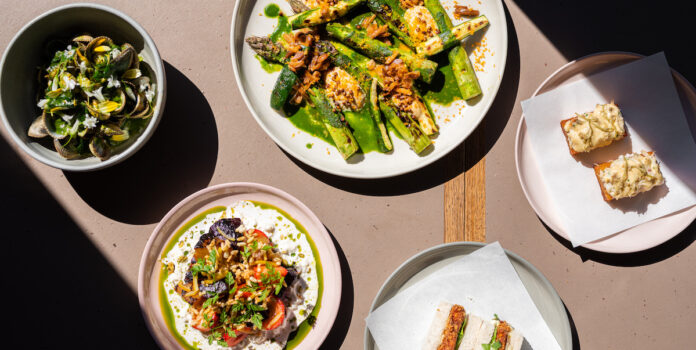 Heading out to some of the best restaurants in and around the City of London often means spending a pretty penny on it all. But there’s one way to get around it – the holy lunch deal menu.

These restaurants book up for evenings all the time and don’t need to do deals for dinner. But, even the top dogs struggle to put bums in seats in the afternoon. That’s so very good for all of us mere mortals.

To entice customers, they drop prices while the sun is still up. They still offer the same quality of cooking, but at a fraction of the price. It’s a massive win!

Just be careful with the booze – that’s how they drain your bank account. Plus, it’s probably not best for those needing to get back to work afterwards.

Two courses for £32, three for £42 & four for £60
Three-courses of Michelin-starred food for only £42 is insanely good. Food of this standard would usually set you back twice as much as that – if not more. You have got to get around this deal at Anne-Sophie Pic’s French restaurant at the Four Seasons Hotel in Ten Trinity Square. And, unlike most lunch menu deals, this one gives you plenty of options. We highly recommend Pic’s famous Berlingots and white mille-feuille dessert which was showcased on MasterChef (although you do have to add another few quid for the dessert). End it all with a drink or two in the Rotunda bar with live piano player and indulge in the high life for an afternoon.
Four Seasons Hotel London at Ten Trinity Square EC3N 4AJ

Two courses for £18 & three for £22
St Leonard’s have a set menu for both weekday lunches and early evenings from 5pm-6pm. So run from the office, straight to dinner and get some really inventive food for a great price. It’s for when you want great tasting dishes that challenge you too. And when you have three courses for only £22, there’s no guilt in also getting a dozen oysters on top for extra decadence. You can really treat yourself at St Leonards in Shoreditch.
70 Leonard Street EC2A 4QX

Three dim sum and one main for £24
These guys came to London after conquering Hong Kong and are the Cantonese cuisine experts. We are obsessed with their weekend dim sum brunch and dinner offerings, but the weekday lunch deals are hard to turn down. Grab a few buns and dumplings to share before tucking into one of their inventive mains. And, if something off the deal tickles your fancy, don’t be afraid to add it on top of everything. Just be wary that it can be easy to over order here as everything looks and tastes so damn good – especially the Peking Duck.
9a St Thomas Street SE1 9RY

Two courses for £17 & three for £20
These guys shot right up to be one of the best UK restaurants upon opening back in 2018 and are still as popular as ever. Getting a table can be tough on evenings and weekends. But lunches are yours for the picking. You get two options for each course (substitute something without meat if you’re a vegetarian) and some freshly baked potato rolls too. It’s a great casual feeling restaurant with really fun and interesting food. It’s great for impressing clients, but if you really want to show off, head around the corner to the Clove Club for their slightly pricier deal. They’re owned by the same team but have a Michelin Star of their own. Their four-course menu goes for £65 and is extra special.
39 Queen Victoria St, London EC4N 4SF

Three courses for £36
Choosing what to order at Sushisamba is unbelievably difficult. We had so much FOMO when we were last there because the long menu is full of really special Brazilian, Peruvian and Japanese dishes. Their three-course deal is more than just good for the budget, it’s also save you from all the ordering anxiety. Get around some ceviche, sushi, gyoza, fresh seafood and a selection of desserts while gawking at the views over London. The sky-high dining destination is a must-visit for any Londoner. It’s bucket list worthy.
Heron Tower, 110 Bishopsgate EC2N 4AY