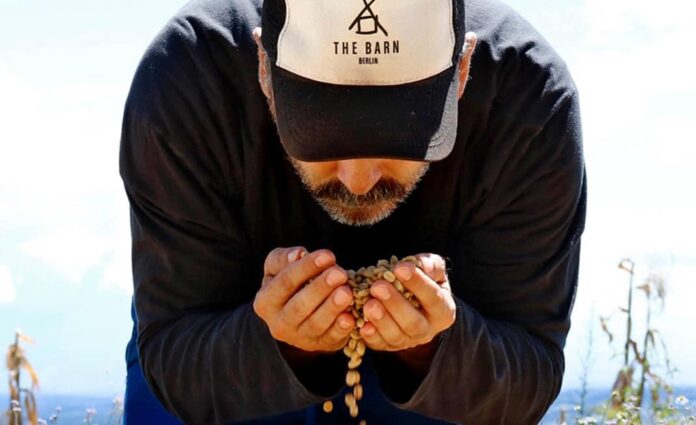 As you collect your double skinny macchiato from the happy and helpful barista at The New Black, did you ever wonder about the journey that unctuous liquid has taken to be in your cup, nestled under that velvety foam of milk?

Coffee, legend has it, traces its origins to an Ethiopian plateau many centuries ago, where the apocryphal goat herder noticed his goats were much livelier after eating the berries off a certain plant.

Cue the inventive monk at a local monastery, who on hearing this story started to make a drink out of the berries and found it helped him to stay alert during evening prayers.

At one point the Pope was even asked to ban this bitter satanic drink, but on tasting it found it to be much to his liking and gave it the papal seal of approval.

Next thing you know a global caffeine addiction has revitalised the way we breakfast, do business and generally socially interact. At one point coffee ‘houses’ became synonymous with business dealings and, indeed, Lloyds of London sprung from one such place.

The bean we all know and love is actually a seed and but for a different choice could be used to grow a new coffee plant.

Two main species dominate the world’s production, Arabica and Robusta, the latter being notable for having a higher caffeine content. Similar to other seed fruit, the coffee tree is harvested either by hand or machine and what follows is a rigorous sorting and separation process.

Coffee cherries are processed to remove the flesh of the fruit (either by washing or a dry process), leaving just the bean and a thin parchment like membrane called the endocarp.

The beans are left to dry and then a process called hulling removes all extra layers. After sorting for quality the beans are then shipped as green coffee. About seven million tons of green coffee are shipped worldwide each year.

Roasters then get their hands on the green coffee and start to work their magic. Coffee beans are roasted at about 288 degrees Celsius, in big rotating drums, to stop them from burning.

They pop to double their size and start to develop the flavours we all know and love and, after a second pop, they’re considered to be fully roasted.

Obviously, the process is much more nuanced and complicated than mentioned here and there’s a reason why some roasters produce so much better product than others.

This difference isn’t just down to the roasting, but also how they work with farmers to cultivate the right sort of trees, take care of the farmers’ employees with housing, healthcare, education and so on, and genuinely control every single detail of the process.

The newly roasted beans are shipped out to coffee lovers and shops all over the world and then the second magical process begins.

Knowing when to use beans and when not to is a key part of the barista’s skill set. The appropriate rest period after roasting and shipping is super important, as is respecting the best before dates.

Watching a speciality coffee barista at work is often like watching a magician preparing for some crazy trick, or a chemist in his lab conducting some weird experiment.

Scales, thermometers, timers all play a part. Once you’ve dialled in your grinder (set it up to grind to the right consistency), worked out your pressure and temperature settings and tried about 10 different cups – you’re ready to deliver the beautiful dark liquid to your thirsty customer on the other side of the counter.

It doesn’t stop there though. As the day progresses, and as the temperature and humidity change, so do the required settings for the recipe. This is an ever-moving target and one I’m glad I have professional baristas to constantly keep an eye on for me.

So the next time you’re quaffing your soy double shot extra hot latte, just pause and take a moment to realise the journey your coffee has been on and the many different experts and touch points that have combined to bring you that delicious drink.

Where to find the best tapas in the City