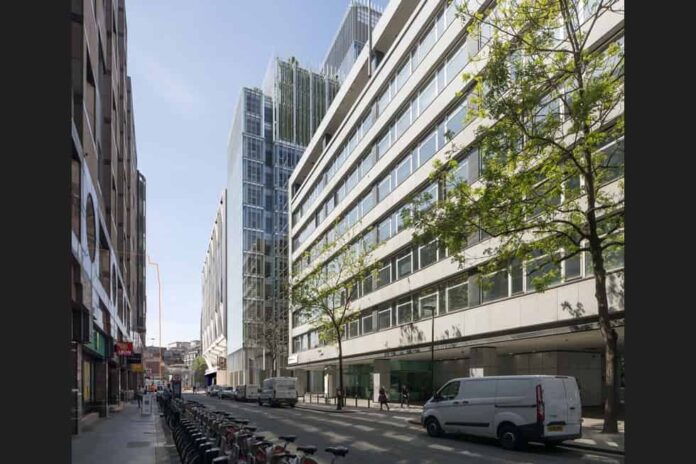 City planning chiefs have approved the demolition of one office block to make way for a taller steel-and-glass building near Moorgate Station.

The City of London Corporation’s planning and transportation committee approved the application to demolish and rebuild Tenter House, in the latest office development for the Square Mile, on 8 October.

The existing 1960s office building, which fronts on to City Point Plaza, will be knocked down and an 18-storey office block erected in its place.

Service road New Union Street will also be redeveloped as part of the plans to create an improved link between Moorfields and the Barbican.

A total of 36 objections were raised, including from neighbouring Barbican residents concerned chiefly about the impact of noise from the roof terraces and loss of light on their properties from the taller building.

Some also said the Corporation should have taken into account the cumulative impact of the nearby ongoing 21 Moorfields development, Deutsche Bank’s planned new Square Mile Home. One of its buildings, which will sit above the Moorgate Crossrail station, will be 16-storeys high.

Planning documents said the assessments in support of the Tenter House application did adequately take the bank’s headquarters into account, adding that the loss of sunlight to some residential properties would be “minor” and caused by balconies, not the height of the building.

The committee passed the application, including a condition that the transport management plan must be provided to the Corporation on an annual basis, factoring in the Elizabeth line at nearby Moorgate when it opens.

The condition was devised to have the effect of minimising freight and managing deliveries to the office building by the time Crossrail arrives.

Planning chief Chris Hayward said he was “delighted” the committee had green-lit a further 28,071m² to the 1.37million m² of office space approved and under construction in the City.

“This development fits in well with the City’s ambitious future growth. Its retail offering, six roof terraces and four internal winter gardens demonstrate the new class of office space in the pipeline for the City’s evolving workforce, now the youngest in England.

“With the future Elizabeth line nearby at Moorgate, we also voted for the developers to provide a transport management plan on an annual basis, to minimise freight and manage deliveries to the building.”