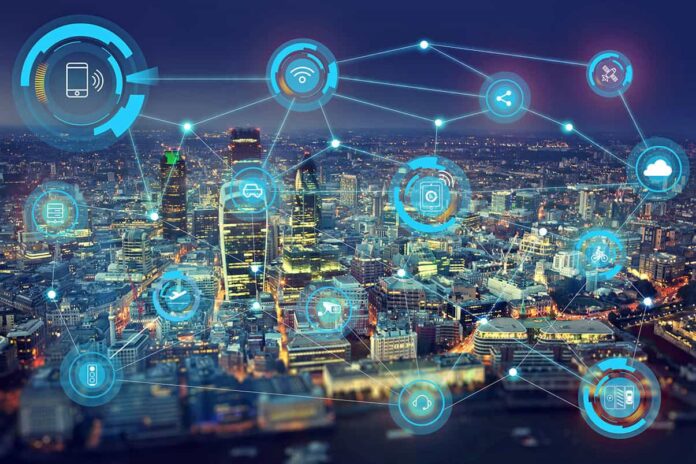 A TEAM of designers and tech experts from Atkins and Schréder has won the first design competition in a campaign to highlight the potential for smart technologies in the Square Mile.

The ‘A Smarter City’ competition, hosted by The City Centre, called for cutting-edge designs in response to the theme of ‘Smart Green Spaces’, and will be followed by a hackathon and competitions calling for ideas on ‘Smart Buildings’ and ‘Smart Infrastructure’.

An exhibition featuring the best submissions  will run at The City Centre alongside The City of London Architectural Model until December, with shortlisted entries from each competition still to come added to the display.

Atkins and Schréder’s winning entry, Key to the City, uses an augmented reality smartphone app and smart-enabled street furniture to celebrate the Square Mile’s network of green spaces, providing information on screen to help Londoners engage with their surroundings.

More than 400 people witnessed the team behind the triumphant entry collect their prize at the end of last month.

Speaking on behalf of the winning team, Neil Manthorpe, who is principal landscape architect at Atkins and Simon Newcombe and business development manager and designer at Schreder UK, said: “It was great to work together developing this unique and innovative strategy on such a challenging and important brief.

“We hope this pushes forward the smarter cities agenda and encourages the realisation of healthier, more active streets and spaces across the City of London.

“The City has a rich history, culture, and varied plethora of open spaces. Key to the City will unlock these hidden layers through the use of smart innovations and encourage more people to explore the rich diversity offered by the City.”

He went on to predict a technology driven Square Mile of the future. “Technological innovation in augmented reality, air quality evaluation, provision of E/V charging, and improved safety will be critical to unlocking the hidden layer of the City’s streets and spaces,” he said.

“We look forward to Key to the City playing an important role in the future development of the City.”

Peter Murray, chairman of The City Centre and New London Architecture, said that the contest proved particularly hard to judge with so many ideas across a wide spectrum.

“We chose the Key to the City because of the way that it integrated new technologies, use of data and augmented reality with public space improvements, green strategies and the necessary infrastructure to deliver high speed wifi, bluetooth, as well as the more conventional benefits of good street lighting,” he said.

Buildings, was announced last week, launching a search for new ideas on building automation, activation and use of space, sustainability and intelligent architecture. Details for the third contest, Smart Infrastructure, will be released in due course.

Benjamin O’Connor, director of The City Centre, located in Basinghall Street, hailed all participants and encouraged those thinking of getting involved in the latest round to take the plunge. “Many people think of ‘smart’ as purely technological, and while technology plays a big part, the key to a truly ‘smarter’ City is innovation,” he said.

“Changing the way people see and think about the City is critical. Atkins and Schréder’s Key to the City celebrates the unique nature of the City’s green spaces while keeping innovation at its heart.”