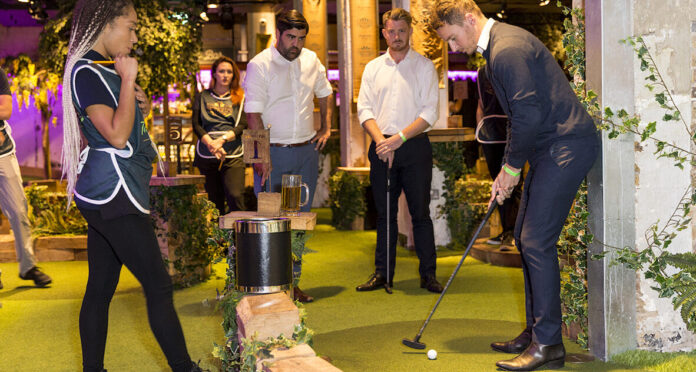 The new obsession with all things nostalgic has led countless companies to revamp old children’s activities, making them more adult friendly. This kind of fun has affectionately been dubbed ‘kidulting’.

And one of the most prominent versions has got to be crazy golf. There are a few spattered about London, but few compare with Swingers right here in the City.

Swingers doesn’t just throw together some basic small courses, dim the lighting, and make it young and hip by adding glow-in-the-dark spray paint and loud music. It’s a far more refined experience than that. And far more grown up.

The entire 16,000 square foot space is based on a 1920s golf-club, set in the bucolic English countryside. It has its very own two-storey clubhouse with a gin terrace, rolling greens for lounging, and colourful foliage for added aesthetics.

Two bespoke nine-hole courses – named ‘The Lighthouse’ and ‘The Windmill’ – take a good while to hack through, while carefully curated decorations and technical lighting make golfers feel as if they’re pitched up on a movie set. Stewards are dotted all over the course in case players find themselves in the rough, but the most delicious extra touch is to be found in Swingers’ dining options.

Swingers City has gathered three of our favourite street vendors to smash out food that best accompanies a night of silly competition.

Patty and Bun, the burger kings of London, are in situ with their signature dishes plus a few exclusive Swingers treats – including smoked confit chicken wings with homemade BBQ sauce.

Pizza Pilgrims has also joined the team, serving some slow proved Neapolitan pizza to the masses, while tasty tacos come flying out of Breddo’s. This taqueria also has a range of tostadas and tlayudas for those wanting something a little different.

Definitely don’t eat before coming here. Save room for the holy foodie trinity – burgers, pizza and tacos. To wash it all down, park up at one of five bars located throughout the concourse. There’s a very good chance a few beers or cocktails will affect your game, so the super competitive among you may want to stay sober during the game and save the drinking for afterwards.

The space is often full of suits throughout the week because it has become a popular alternative location for work drinks, but don’t be put off by the corporate crowd. Once people get boozy and the DJs start doing their thing, everyone is on the same level.

Swingers is exactly what stressed-out London folk need – it allows us to escape our hectic adult lives while still holding on to our competitive tendencies. Fore!