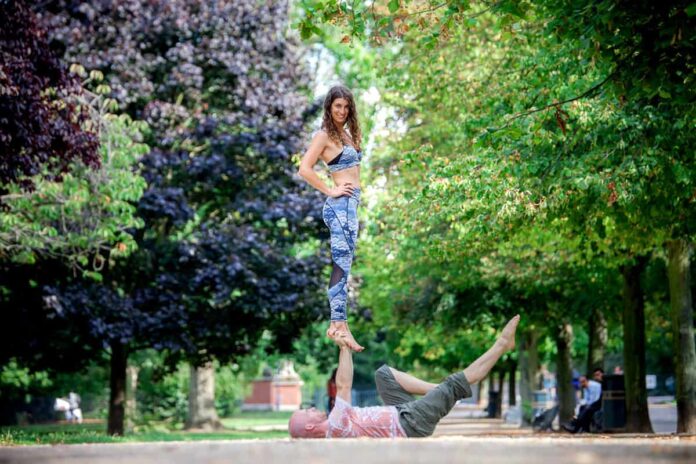 YOGA is a singular pursuit. Your breathing, your posture, your aches and pains, your everything. You may attend a class at a local gym, maybe with a friend, but the physical side of yoga is focused on the self.

Now, you can turn it into a team sport. There is a form of yoga based on partnership and trust. It’s also pretty photogenic.

Behind a blue door, down in an underground dance studio in Farringdon you’ll find Acro-yoga instructors Rebecca and Justin, probably in some impossible looking position.

A group yoga session where people partner up, one as the base and one as the flier. Justin studied Acro-yoga in Greece before returning to London as one of the City’s first teachers.

Meanwhile, Rebecca’s Acro-yoga journey took her to Thailand to train under Jason Nemer, the founder of Acro-yoga international.

This brand new class brings both of their expertise to a small class, ensuring close attention to students’ form.

“At the core of it Acro-yoga is a combination of acrobatics and yoga, with a bit of Thai massage thrown in,” Rebecca says.

“It normally involves two people, with one person as the base and the other the flier.

“The flier and the base work in tandem to do the poses. Some people think, as I did when I started, that you can’t do it unless you’re in a couple but it’s normally 50-50. 50% couples, 50% people coming along solo. It’s great for both.

“In the class we’d start off with some yoga and some partner yoga, to stretch and warm up. We also start with some trust exercises. After that we go into the fun part, the Acro-yoga.”

Half the class is play, with a trial and error process before mastering each pose. Rebecca and Justin demonstrate the pose first, then the class follows, under close supervision. Surprisingly, many of the poses which first appear advanced or difficult are straight forward yet pleasantly challenging.

Most rely on balance between base and flier and, while offering a workout, can be achieved with the right instruction.

The mind, body and soul benefits of yoga are well known. Acro-yoga expands these to relationships.

“I think having that physical contact with someone builds that connection. Trust and communication. To me they are the key elements,” says Rebecca.

She adds: “You have an element of trust, because to fly with someone you need to trust them and yourself.

“Also, you need to communicate when something’s not working so it teaches you to be more direct.

“It will help get you in shape and because it’s fun you don’t realise it’s exercise, until the next day and you ache.”

It’s £15 for an hour-and-a-half class. There are also concessions.

Every Tuesday at 7pm at 73 St John Street, Farringdon EC1M 4NJ. You can contact Justin and Rebecca on Facebook @acroyogajustinandrebecca.