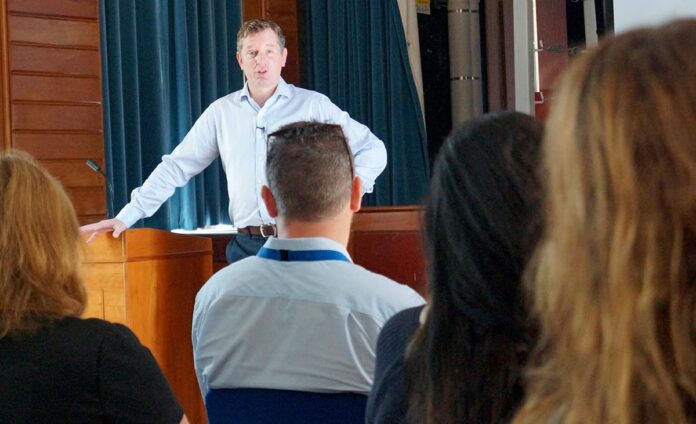 PERSONAL accounts of the 7/7 terror attacks in London and the more recent strikes on the Capital and in Manchester have been recalled by the brave officers who attended the scene.

The City force’s CH Rolfe Hall at Wood Street Police Station played host to a specially arranged officer and staff welfare event on 1 August, with a number of guests speakers telling  stories about the impact that the realities of day-to-day policing can have on officers.

City of London Police Commander Dave Clarke and Chief Superintendent Glenn Maleary opened the workshop, which featured detailed and personal presentations, including a talk from Metropolitan Police Chief Superintendent John Sutherland, author of Blue: A Memoir – Keeping the Peace and Falling to Pieces, which details his battle with depression and subsequent recovery.

In front of 100 guests from various emergency services, including London Ambulance Service, Metropolitan Police, and British Transport Police (BTP), Ch Spt Sutherland spoke openly about how work led him to suffer a breakdown in early 2013, and explained his illness with a personal insight into what it is to be a police officer in Britain today.

BTP constable Richard Oakley, one of the first officers on the scene at Russell Square station on 7 July 2005, and City Police Sgt Mark Montgomery spoke about their own past mental health issues as well as the treatment and support they received.

Superintendent Bill Duffy, from the Square Mile’s local force, arranged the event in recognition of the impact that dealing with the recent terror attacks in London and Manchester has inevitably had on officer welfare.

He said: “The feedback we’ve already received from this event has been really positive – and has shown us the need to do more of these types of  events. We’re already planning our next seminar, as it has been a great opportunity for people to listen and learn.

This event was a way for us to focus on the welfare of the frontline officers of all the emergency services. In a few short months, the UK suffered four terrorist attacks and the Grenfell Tower disaster, and all services face the continued strain of providing business as usual to our various communities.

The day-to-day challenges of providing a modern, effective police force never decrease, and sickness and mental health issues are a reality for police forces across the country that we have to address.

We wanted to give officers the opportunity to listen to those who have suffered, understand the signs and let them know that help is available without any stigma.”