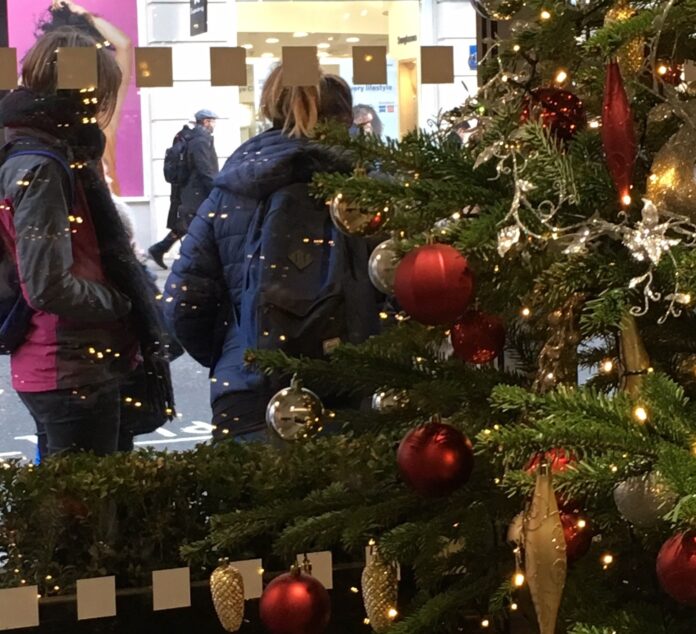 It’s two degrees C, and even wrapped up against the winter cold the wind chills to the bone.

There’s a handful of people visible cleaning the streets or in baker’s shops and cafes across the Square Mile.

But the outreach team from homelessness charity St Mungo’s are looking in the hidden nooks and crannies out of sight where, despite the cold conditions, rough sleepers are trying to get 40 winks.

They keep their eyes peeled for sleeping bags hidden in the gloom in quiet spots, for people they already know and for referrals from the Streetlink app.

“Our ethos is to make every contact count,” said St Mungo’s head of outreach, Kathleen Sims.

“It’s about making them feel empowered and that they count.”

She is responsible for outreach in the City of London, Westminster, Brighton and also pan-London.

We are joined by Councillor Marianne Fredericks, the chair of the City of London Corporation’s new homelessness committee.

“What’s the top of my wish list for Christmas? A magic wand. Everyone has a right to feel secure,” she says.

“It’s really important for us to be able to engage with rough sleepers and ensure that they understand the harm that rough sleeping’s doing to them  and encourage them off the streets so we can signpost them to accommodation and, importantly, help them with any health issues they have.”

The outreach team talk to rough sleepers about their welfare and discuss options to help get them off the streets and out of the cold.

They go out in the middle of the night as well as the early hours. This summer, they teamed up with the Corporation and other partners to run outreach hubs in the City to help get people housed and tackle other issues such as drink or drug problems.

People can report concerns about rough sleepers anywhere in England and Wales to Streetlink, which sends details directly to outreach teams or the local authority.

The “unusual geography” of the City with its historic medieval street layout and ’70s buildings with “overhangs” mean there are quiet places to hide away for the night. In October, 36 people were sleeping rough in the Square Mile.

Ms Sims said: “Due to the nature of the City we have got a lot of people flowing in, it’s very transient.”

I’ve joined one of this morning’s two outreach teams in the City. We’re heading east from the Guildhall, towards Moorgate, Liverpool Street and Bishopsgate where the team want to do welfare checks, following some incidents in the area.

I’ve been asked not to disclose exact locations, given the vulnerability of the rough sleepers.

Close to Liverpool Street, the team wake up a young man with an angry black eye. He tells them he’d headed on to a train to escape a violent situation and has just spent his first night on the streets. He looks shocked and bears an angry black bruise, which triggered him leaving home and bedding down on the cold ground in the City.

Ms Sims said: “We’ve let the hub know he’s on his way and we’ve put him in a taxi there. He seemed really relieved to get some help. Yesterday, he had a home and today he’s on the streets. It can happen that quickly.

“We got someone out of this – it’s like the Monopoly board where you ‘do not pass go’ and don’t get on to the streets.”

She explained: “I make the analogy of a tree. For a man, often they fall straight down from the tree from top to bottom and that really hurts.

“For a woman you may hit all the branches on the way down. It’s not hard and fast, it’s really drawn out, so you are battered and bruised.”

Factors could be co-dependent relationships, having a child taken away, or isolation.

During this shift the team see 10 people, including one woman.

According to new research for homelessness charity Crisis by Heriot-Watt University, more than 24,000 people in the UK will be sleeping outside, on public transport or in tents this Christmas.

By now, the rush hour is in full swing and commuters hurry past as we duck into a subway and spot two people tucked up in sleeping bags, surrounded by bags of their possessions.

Ms Sims and her colleague Steph Ratcliffe gently wake one of the men and buy coffee before having a chat to encourage them to use support services, including St Mungo’s outreach hubs.

The charity has three centres in London where people’s needs can be assessed in the warm and talk to those who are new to rough sleeping about their options to get them off the streets.

During our shift, the Severe Weather Emergency Protocol (SWEP) is called. It means that extra bed spaces would be available that night. Changes by the Mayor of  London mean that SWEP kicks in on the first night of freezing temperatures to protect vulnerable people from the cold that can kill, rather than the previous trigger of three consecutive nights of zero degrees recorded at Westminster. Staff working with rough sleepers also encourage them into longer term options.

Last year, when the Beast From the East brought chilling conditions, St Mungo’s put on extra shifts to get as many people under cover as possible.

There were 30 SWEP nights in the City last year and St Mary Aldermanbury stepped in to help with extra beds. The City of London has earmarked its £35,000 grant from the Department of Housing, Communities and Local Government for three beds at Caritas Anchor House in Newham. People will be referred by the St Mungo’s team.

Other plans include a pilot winter shelter with Tower Hamlets Council and housing justice.

Ms Sims explains that the extra cold weather help is “about saving life and emergency provision.” The outreach team also explain to people the risks the extreme cold pose to their health.

She adds: “They will keep on opening places. We will find people a place”.

Councillor Fredericks has been out with them before and spotted some familiar faces on the streets.

“The outreach team really engage with people to give them a route back in to a home,” she says.

As Ms Sims talks to one man hunkered down in a sleeping bag outside an office, someone stops to donate food for his dog.

She says it’s a tricky subject as while she would never tell people what to do with their money it can be a disincentive for getting help to get off the streets.

“If somebody is hungry, our teams will feed them.”

Cllr Fredericks said: “People want to help, but sometimes the help does not help the situation.”

Ms Sims said exploring options to help people get and stay housed  “is all about giving people their dignity.”

And with that, she’s off to prepare follow ups with the people we saw and another crack-of-dawn start to get people under shelter this Christmas – and beyond.