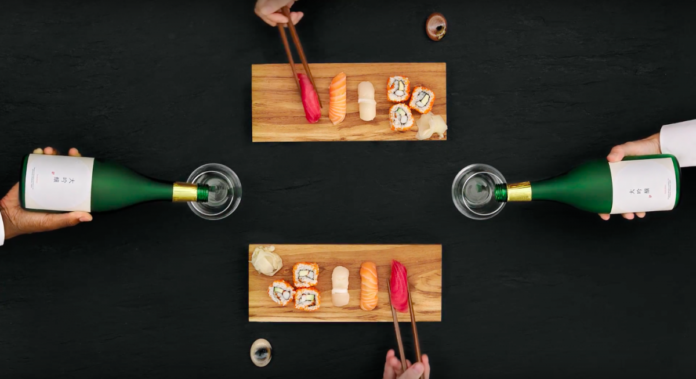 London’s first ever Sake Week is hitting over 40 restaurants in the Capital, during which chefs and bartenders will work together to create some damn impressive food and sake pairings.

And it won’t just be served alongside the usual seafood and sushi. They’re aiming to challenge Londoners’ perceptions of sake. They want people discover the huge diversity of Japan’s famed rice-based tipple.

London Sake Week participating restaurants will be pairing the beverage with cheese fondue, fish and chips, fried chicken and all other alternative dishes.

This ancient Japanese drink has always been an underdog in the western alcohol world but love for it has grown considerably over the past few years. The UK is now the biggest importer of sake in Europe.

And sake lovers throughout the City of London are capitalising on this new-found. Here are some of the best places to sample some sake throughout London Sake Week, running from 22 February to 3 March.

The cheese mongers at La Fromagerie first discovered the beauty of Sake paired with cheese back in 2012 – it was a bold experiment, but their first tentative steps led to more events and an evolution of flavours and pairings. Now, throughout winter (not just for Sake Week) they’ll be running a winter sake and cheese tasting. They’ll focus on the more unusual pairings, such as burrata with shoyu & wasabi, and warming specialities such as an epic sake fondue – all paired with winter sakes. You can then buy however many bottles of sake and wheels of cheese as your slightly intoxicated heart desires.
52 Lamb’s Conduit Street WC1N 3LL
2-6 Moxon Street W1U 4EW

The Four Seasons Hotel’s mixed Japanese and Cantonese restaurant, Mei Ume, in Trinity Square is taking the lead in London for Sake Week. They are holding a super special Keigetsu sake dinner on February 21 where they’ll be pairing seven different sakes, with seven Chinese and Japanese dishes. And throughout the rest of the week, their incredibly knowledgeable bartenders and sommeliers will be working the room, teaching guests about sake and enticing them to try the tipple with their meals. Mei Ume has always championed sake, so this week is perfectly made for them.
10 Trinity Square, London EC3N 4AJ

Nobu fans, here’s your chance to meet the man behind the sushi. At the beginning of Sake Week, Chef Nobu Matsuhisa will team up with Sake-Master Fumio Hazu of Hokusetsu Sake Brewery to host two luxurious dinners on 22 & 23 February, featuring a gourmet 8-course tasting menu paired with a selection of premium sakes. Both evenings will have completely different menus so be sure to choose your favourite before booking. You’ll have the gruelling task of choosing between their signature yellowtail jalapeño with yes soy and sashimi four ways. Or between the first night’s slow-cooked Japanese beef with Jerusalem artichoke puree and the second evening’s wagyu steak. Life is hard guys.
Nobu Shoreditch, 10-50 Willow Street EC2A 4BH

The Japanese, Peruvian and Brazilian restaurant with views across the City will be taking part in Sake Week by extending their bar’s sake offerings. Traditionalists can match the different sakes to Sushisamba’s seafood and sushi dishes, but we recommend you try something a little different. Pair some of the aged sakes with more punchy Peruvian dishes and play about with pairings yourself. But, if you don’t have the confidence on that front, then their pro bartenders will surely guide you in the right direction.
110 Bishopsgate EC2N 4AY

The London-based Japanese restaurant is known for its traditional handmade soba noodles, but they’re extensive sake menu has always been mightily impressive. They championed the drink before it was cool. So now, they’re in the perfect position to participate in Sake Week. Try their plum, yuzu, cloudy and sparkling interpretations of sake and try them served either hot or cold. The options are endless at Yen. Be sure to try them alongside tempura dishes, noodles, their meatier options and, of course, some sushi and sashimi.
190 Strand WC2R 3DX