You’ll find the lesser known island of Curaçao just off the coast of Venezuela in the south of the Caribbean. Despite being small, Curaçao certainly packs a mighty punch when it comes to culture and tradition, while it’s beautiful vistas will remain firmly in your mind for years to come.

Curaçao is a perfect mix of rugged landscape and picturesque beaches. With secret bays, limestone caves and beautiful waters, the Caribbean island is the epitome of paradise.

Despite being a predominantly peaceful place, the island’s capital city, Willemstad is a lively and energetic area full of boutiques, restaurants, bars and clubs adjacent to brightly coloured colonial buildings. That being said, the capital is a UNESCO World Heritage City and is packed with historical sites including Fort Nassau.

From Dutch architecture to Creole cuisines, the island is awash with many different cultures and customs. So, let us take you on a journey to the island of Curaçao as we reveal all it has to offer. Oh, and it’s pronounced Kur-uh-sow.

The island of Curaçao is a former Dutch Caribbean colony. First inhabited by South American Arawaks, these people were enslaved by Spanish colonists in 1499. Later, when The Netherlands gained independence from Spain in 1634, the Dutch East India Company seized the island and established a capital city and harbour – Willemstad is still the island’s capital today.

After the Dutch gained control of the island, West Africans were imported as slaves to provide labour for farming and mining, during which time the island was passed around and fort over by the Dutch, French and English.

Many years later, after the abolition of slavery in 1863, the island opened an oil refinery on the grounds of a former slave market to boost the failing economy. This refinery later provided fuel to the forces during the second world war.

It wasn’t until 1954 before Curaçao gained self governance as a territory of the Netherlands Antilles. Curaçao is now independent in internal affairs, but the government of the Netherlands is responsible for matters such as defence and foreign relations.

The language and social influence of the Dutch is still there today alongside Indian and African traditions including the creole language Papiamento. Today, the island is a beautiful melting pot of cultures and people.

Home to a plethora of sights and sounds, Curaçao will certainly keep you entertained throughout your stay.

Apart from the idyllic beaches, the island is also home to several national parks, including the most-famous Christoffel Park. Just a 40-minute drive from the capital of Willemstad, the park is at the northwest point of the island.

Alongside incredible biodiversity, the 1,800-hectare reserve is formed from three old plantations, which includes Savonet Plantation. You can find the Savonet Museum on this land now, which is also worth the visit as it gives more insight into the island’s terrible past and association with slavery. The park has eight hiking routes and you can climb to the summit of Christoffel Mountain if you’re feeling adventurous. At 375 metres, the mountain is Curaçao’s highest point and will give you panoramic views of the entire island.

If you want to learn more about the island’s slave trade, make sure you visit the Kura Hulanda Slavery Museum which will give you a more in-depth perspective.

INSIDER TIP: Book a tour to the Hato Caves. The 300,000-year-old caves are laden with marine coral formations, waterfalls, and even a colony of long-nose fruit bats. What’s more, you’ll see ancient tribal petroglyphs on the cave walls, which are around 1,500 years old!

Instagrammers will have to take the short trip to Klein Curaçao. Around 15 miles off the mainland, the uninhabited island is picture perfect and you can spend the day snapping shots of you and your loved ones on the sandy beaches, splashing in the sea with the turtles or exploring the old lighthouse. Make sure you take a picnic and a good book to enjoy in between snaps of the shores.

Curaçao is just 40 miles across at its furthest point, so you can really enjoy all it has to offer when it comes to food and drink. With a medley of influences from across the world, the dishes are diverse and delicious.

There are a few dishes notorious with the Curaçaoans, but Keshi Yena is widely considered the national dish of the island. An example of cultural fusion, the savoury staple is a large ball of cheese (Edam or Gouda) stuffed with spiced meat, olives, capers, onions and tomatoes before being baked in the oven.

Another firm favourite with locals is Funchi. The dish, made from cornmeal, comes from the African roots of Curaçao. The dish looks a little like polenta and is served as a side accompaniment with other culinary delights. You’ll often see beans added for extra flavour.

And, of course, seafood is a must on an island. If you’re looking for fine dining, visit the restaurant Fish & Joy (fishandjoy.com) in the capital of Willemstad. Or, for more authentic Caribbean vibes, cold beers and good music, head to Bario Urban Street Food (bariostreetfood.com). The laidback restaurant has an events calendar, so you can enjoy live music most nights with your meal. 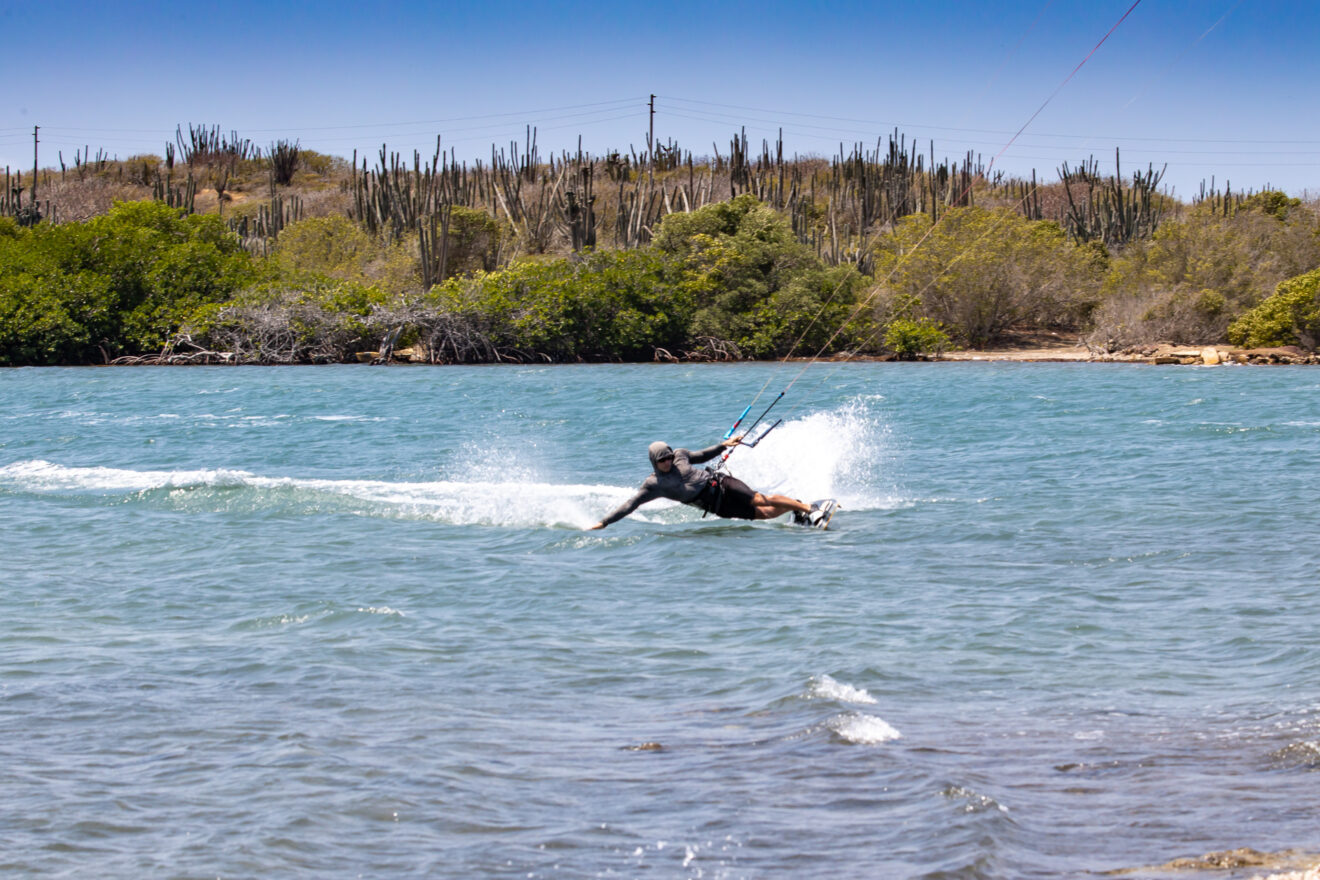 Explore the island by trekking, mountain biking and ATVing while taking in the incredible views. But, snorkelling, fishing, kayaking and jet skiing from Tugboat Beach should be top of your list if you want to take a deeper dive into the island’s offerings.

Below the surface of the crystal clear ocean, you’ll find coral reefs teeming with marine life. If you’re a thrill seeker, head to Blue Bay just off the island’s northern shore for a diving experience like no other with a steep seafloor drop into an underwater world.

For something cool, yacht tours around the island are available which give you unique views of the coast while you relax on deck. If that’s not luxury enough, you can charter your own private yacht from places such as Northrop and Johnson (northropandjohnson.com) and enjoy unforgettable moments as you see dolphins bob out of the water and take in breathtaking sunsets over the azure lagoons.

History buffs will be intrigued to hear that the island also has a lot of Jewish history and tours of the community are available. You’ll be joined by a knowledgeable guide as you check out the area steeped in historical architecture, including the 17th-century Mikvé Israel-Emanuel Synagogue in the capital city, which is the oldest in the Americas.

Curaçao’s fauna offering is just as incredible as it’s flora. The tropical island is home to many wonderful species of animal and even hosts 11 native breeds, including the endangered Curaçao white-tailed deer.

There are four types of sea turtles found in the waters off Curaçao, these are the Green Turtle, the Hawksbill, the Loggerhead and the Leatherback. The hawk-eyed amongst us might notice a couple of the breeds nesting in a protected area on the shore of Shete Boka Park.

Named the king of Curaçao reptiles, the island is full of iguanas. The large, graceful beast is also a local delicacy and it’s meat and eggs are served on most menus – it’s even said to be an aphrodisiac. Don’t worry though, the island has these critters in abundance.

Curaçao plays residence to more than 168 species of bird, including the native Trupai. The black bird is unmistakable with its brightly coloured orange belly and white-spotted wings. You can also visit the island’s ostrich farm, which has 400 of the flightless birds and is the biggest farm outside of Africa.

You can’t visit Curaçao without finding the flamingos. If you head to Salt Lake Willembrodus, you’ll see hundreds of the beautiful exotic birds congregating in the water. There is a specific area in Jan Kik which allows you to watch the animals from a safe distance.

One species of mammal that may surprise you is the island’s native pigs. Head to Playa Porto Marie beach to see the pot-belly creature roaming the sandy shores.

Despite being a small island, Curaçao goes all out when it comes to celebrations. The island’s famous North Sea Jazz Festival has been going for several years and sees people from across the globe enjoy the line up during September.

Fitness fanatics will enjoy watching the annual KLM Curaçao Marathon as runners and athletes take to the roads during the month of November in pursuit of a medal. The route takes runners along the coast and past Queen Emma pontoon bridge and Juliana Bridge, which is 185 feet above sea level.

The real must-see event is the carnival – or carnaval! The island’s annual celebration of Caribbean culture sees almost all residents and tourists get involved. You’ll hear Tumba and Calypso music blaring out of speakers throughout the first couple of weeks of the year before a full on party takes place on the final weekend in February after the parade. The procession involves the whole community and also plays host to a beauty pageant.

There are plenty of places to rest your weary head during your time on the beautiful island of Curaçao. There are ample hotels and quirky hostels along the coasts and in the hustle and bustle of Willemstad. However, those looking for pure opulence should book a stay in the luxurious Sandals Royal Curaçao (sandals.co.uk).

Nestled in the picturesque Southern Caribbean, the all-new Sandals Royal Curaçao is the 16th addition to the Sandals portfolio and is opening in June 2022. Be one of the first to experience the brand-new resort and indulge in pure luxury.

You’ll also find a gorgeous infinity pool with views overlooking the sea and the rugged mountain landscape. With eight on-site five-star restaurants, guests will indulge in international flavours, including an authentic wine and Dutch cheese bar. Plus, the resort will also have three new beachside food trucks offering authentic and traditional Curaçao fare, Spanish tapas, and Asian fusion, as well as 10 bars so you can enjoy your meal with a cocktail. There will also be a spa, and access to the neighbouring 18-hole golf course! The resort will be the largest on the island and host two on-site marinas and 70 dive sites.

So, if you’re deciding on travelling this year, we hope we have given you enough information on why the breathtaking island of Curaçao should be top of your list. As they say Papiamento, Ayo!

For up-to-date travel advice and even more information on what to see and do in Curaçao, visit curaçaotouristboard.com 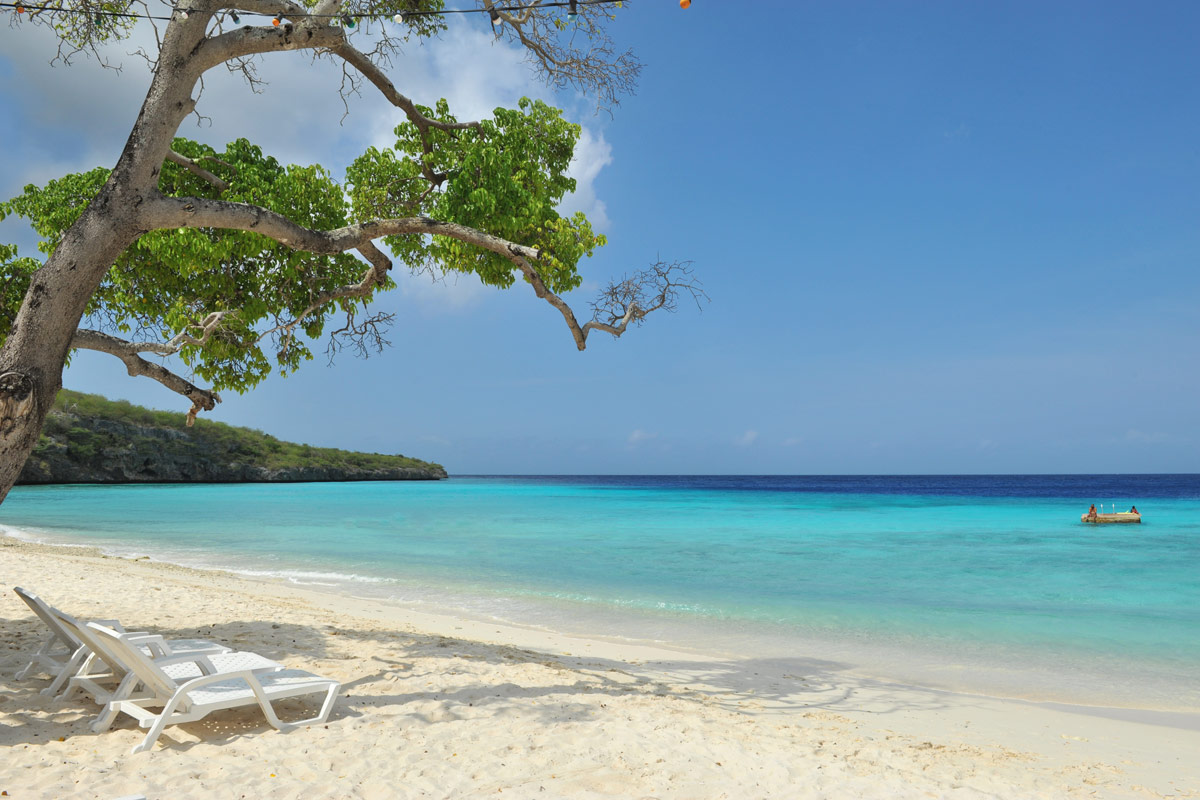