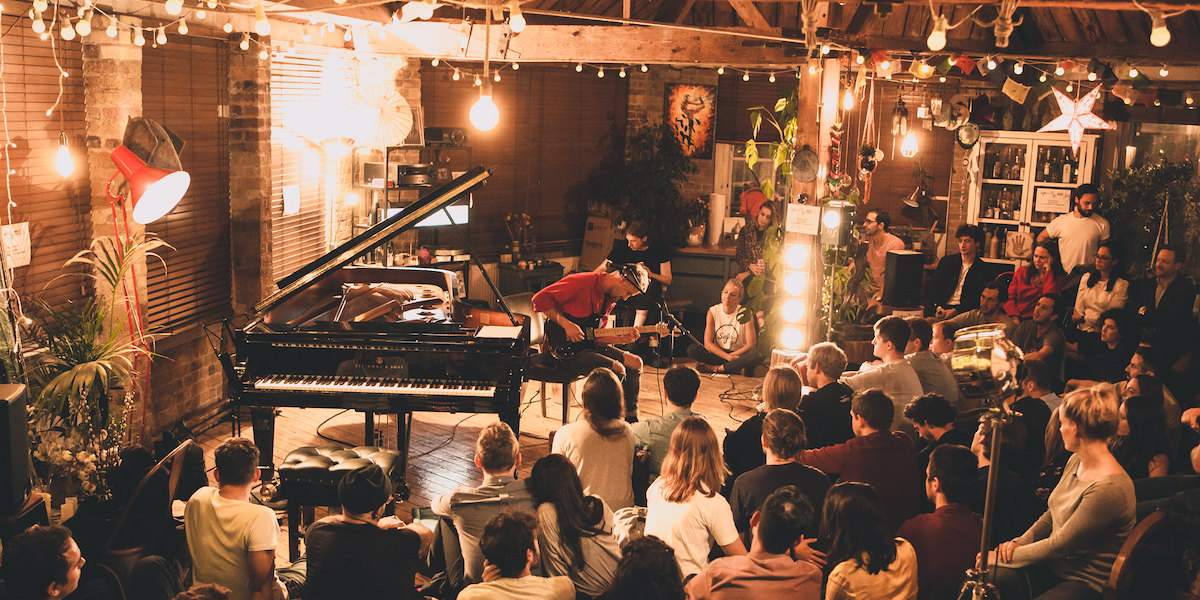 You can come across both the best and worst of humanity at a Sofar Sounds gig.

Sitting within one of the Square Mile’s co-working spaces there’s a group of lads laying down with their socks off and feet out in the crowd, a couple are munching loudly on crisps while the musicians play and a young woman sits up the very front but spends the entire evening on her phone texting.

This all flies in the face of the Sofar Sounds ethos, which is based around unbounding respect to the performers. The entire concept started off because the founders were fed up with the ways in which people acted at traditional music gigs.

Most were on their phones, they kept talking throughout the sets, and there were often too many people crammed into tight spaces. To counter this, they started holding shows in people’s front rooms. They then slowly branched out to other London venues (think yoga studios, pubs and churches) before they went global. Now they are in over 430 cities worldwide.

Initially, they would set the rules very clearly for each event. Don’t use your phone, shut up and enjoy a night of live music. They seem to have laxed on these rules recently – hence the shoeless chaps, loud food eaters and phone obsessed viewers being present. But it still holds on to its extra special qualities.

The secret locations are still a huge drawcard. When you’re booking your slot online, you only get told the borough of the location. You don’t get an address until a few days beforehand. That’s to safeguard the people hosting the event – which can be just about anyone who can fit 40 or so people into one of their rooms.

Natasha Bobbe, the London director for Sofar Sounds, also notes how this is a little different in the City of London because the area has so few residential buildings.

“The locations are usually an interesting office or co-working space or it could be a beautiful church or listed building – we’re open to most places if we think it creates an interesting guest experience.”

And, on top of the secret location, you won’t know the artists playing either. This way, people are somewhat forced to experience genres of music they wouldn’t necessarily seek out themselves. It’s about broadening your own tastes and giving a stage for lesser known performers.

It also allows for the Sofar Sounds team to curate some really fun and interesting line-ups. You might start off with a small orchestral ensemble, move on to a rapper and then finish with a poet. You never really know what you’re getting into, and that’s a part of its beauty.

Natasha notes that there have been amazing venues with skyline views over London and many incredible musicians.

“But sometimes it’s the unexpected moments in a tiny living room on a Sunday evening in Kilburn that end up blowing your mind. It’s all about discovery, that’s what keeps it special.”

You’re also guaranteed to save a whole heap of money because you’re free to take your own alcohol and food. Just be sure to bring a bottle opener of your own. So many fools (ourselves included) were tracing around looking for a way to open their beers for quite some time.

And, even with some of the irritating patrons, it is still special. You get up close and personal with brilliant artists while checking out some fun and unusual spaces around London.

We just wish they reminded people to be quiet and put their phones away like the good old days when they first started out – although no one should need to be told not to get their stanky feet out in an intimate public setting. Come on people. But that’s not on Sofar Sounds. Sometimes these terrible people just can’t be stopped.