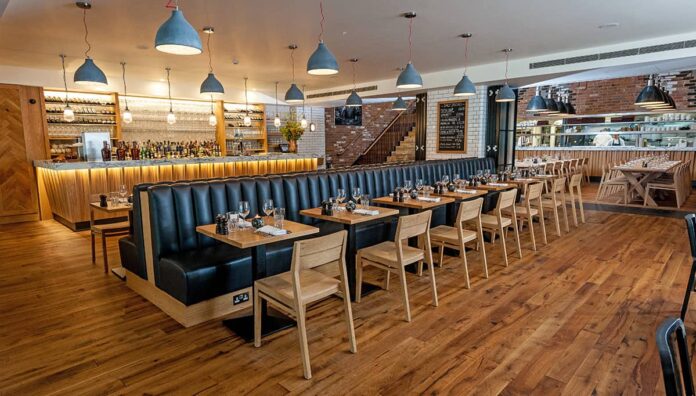 The next best thing to nabbing a spot on a superyacht this summer is positioning yourself with a good view of one.

And while the rest of Europe is off ogling marinas up and down the Mediterranean, those stuck in London will have to be content with getting their superyacht fix at St Katharine Docks, the Capital’s only central marina just east of Tower Bridge.

Let’s be real here, Port de Cannes or Marina Grande it is not. But any unfavourable comparisons are a good deal easier to swallow from a table on the terrace of Tom’s Kitchen; where Tom Aikens’ modern Anglo take on French brasserie food is better than anything they’re serving on board. Probably.

Aikens, who at 26 became the youngest chef to be awarded two Michelin stars at the helm of Pied à Terre, became a pioneer of the high-quality casual dining formula with the original Tom’s Kitchen barely a block from his eponymous fine dining Chelsea restaurant in 2006.

The St Katharine offshoot, his fourth, consolidates the offering with an emphasis on seasonality and ethically sourced produce throughout.

Starters are a mixed bag; liver and foie gras parfait and steak tartare offering diners a window into Aikens’ roots in haute French cuisine, while spicy crab cakes and mac and cheese keep things closer to the ‘casual’ dining tag.

Both work, though the burrata served simply with an orange dressing and walnuts emerges the winner; a fine flavour hit oozing all over seeded crispbread.

Mains also oscillate between fine dining and comfort food, and although many before us waxed lyrical about Aikens’ seven-hour confit lamb rump, we sidestep it in favour of seabream and a steak chateaubriand.

The former, served with chicory and heirloom tomatoes, lacked slightly in flavour, particularly in light of the seagulls flapping overhead, but the latter was tender, juicy and spot on.

The service is friendly and attentive, even as the cosy rear of the restaurant begins to fill up with local office workers and the odd tourist stumbling in fresh off Tower Bridge.

Multiple faces return throughout the evening to top up our glasses of a full-bodied South African Kanu Chenin Blanc and clear scraped plates, and all are quick of hand and recommendation – particularly that we don’t miss out on dessert, despite our protestations.

A chocolate and peanut butter marquise sounds tempting, but we stick with the far fruitier iced raspberry parfait, which is lifted by a creamy mango sorbet and the crunch of honeycomb and pistachio.

Aikens seems to like a Thameside setting for his brasserie chain, with Tom’s Kitchen sites at Canary Wharf, Somerset House and HMS Belfast.

And on a warm, cloudless evening it’s easy to see why; the ‘fine-but-friendly’ dining approach making it easier to pretend you’re the proud owner of one of those yachts bobbing away beside you.