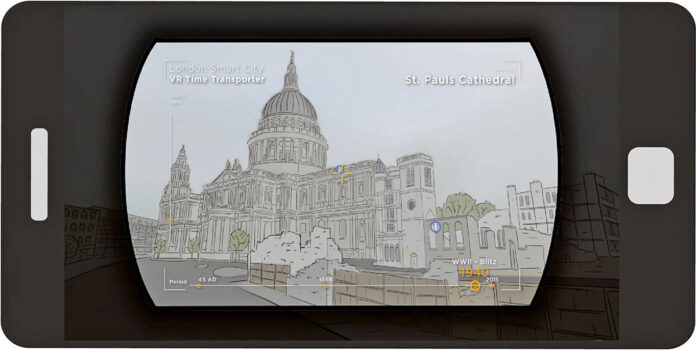 A team made up of members from BAM Design & Construction and the Museum of London has scooped the second design competition in The City Centre’s campaign to highlight the potential of smart tech in the Square Mile.

The ‘A Smarter City’ competition called for cutting-edge designs in response to the theme of ‘Smart Buildings’, asking entrants for new ideas on building automation, activation and use of space, sustainability and intelligent architecture.

BAM’s winning entry, the VR City Timetransporter, used an augmented reality smartphone app to transport users back in time to see key sites in the City down the ages through a fully immersive 360-degree virtual environment.

Eras recreated include Roman Londinium, the vibrant Medieval City, life during the Plague and Great Fire, Victorian London, and the Blitz.

Paul Beckett, policy and performance director for the built environment at the Corporation, presented the winning team with their gong

“The winning entry demonstrates how smart technology can give City workers, visitors and residents added appreciation of our rich and unique cultural heritage following the recent launch of the City’s Cultural Mile and the Londinium season,” he said.

“With 1.25million square metres of office space under construction that has the potential to accommodate 75,000 workers, the City is committed to exploring smarter and more sustainable ways of designing, constructing and using our buildings and public realm.”

Speaking on behalf of the triumphant team, Andrew Pryke, head of design and digital strategy at BAM Construct, added: “We wanted to link the City of London’s rich and varied history with a fully immersive app that allows you to be transported to key points in time.

“Now the history and heritage of the City can be made visible and available to all.”

Meanwhile, The City Centre has also launched the brief for the third round of its competition, ‘Smart Infrastructure’, which is now open for entries. Teams are invited to submit new ideas for security, energy and transport in the City of London. A full brief can be found at asmartercity.london and the closing date for entries is 25 September.