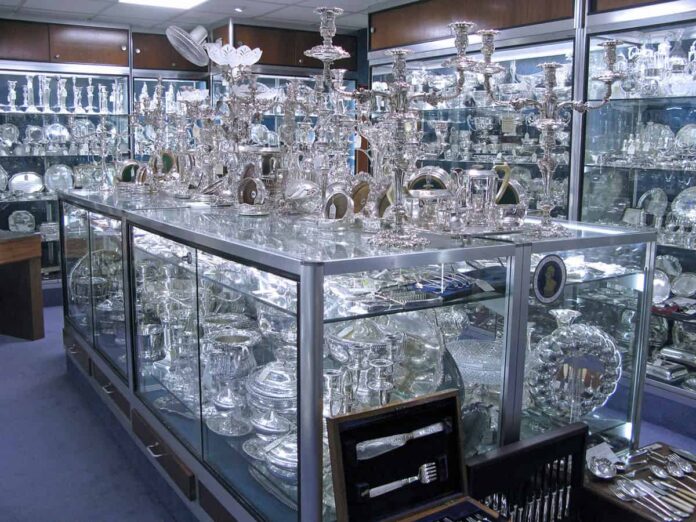 When it comes to shopping for silver in the Square Mile, Hatton Garden might have the legacy and Royal Exchange might have the big-name brands, but anybody with a true magpie glint in their eye knows the biggest collection of treasures is underground.

Deep below the heart of London’s legal district lies the world’s largest collection of museum-grade retail silver. The London Silver Vaults occupies the former Chancery Lane Strong Room; a vault for the ‘haves’ to keep their valuables safe from the ‘have-nots’ during Victorian times.

Today, the strongroom is still estimated to be the fourth most secure building in the world, but it’s not just the wealthy who have reason to walk through that innocuous door.

“I think it’s a misconception that silver is only for people with a significant amount to spend,” says third-generation dealer John Walter, who took over running his grandfather’s business William Walter in the 1980s.

“We’re cheaper than the West End, and there’s such a vast choice down here. If you want it, you’re going to find it.”

True to form, John’s shop is filled with mostly Georgian silver, ranging from elaborate table centrepieces to tea and coffee pots, while neighbour Steven Linden, another third-generation dealer, specialises in smaller homeware items like cups and cutlery in silver and silverplate.

Across the corridor, the Silver Vaults’ longest running store holder Raymond Feldman has dealt mostly in Victorian silver since he began work there as a 17-year-old apprentice in 1954, opening up a shop of his own by the age of 21.

“I always loved Victorian – I love buying it, and I love selling it even more,” he says, counting centrepieces and tea sets among his best sellers.

Son Michael carries on the family tradition in a unit next door, edging into the 20th century with a pair of 1930s beef carving trolleys that are currently all the rage with the Capital’s top hotels and private members clubs.

Down the hall, John Surtees is an all-rounder in modern and antique English silverware dating back 300 years, but specialises in sterling silver and enamel animal models, while John Hamilton at No18 and 19 deals exclusively in cutlery; from colossal sets right down to single spoons.

With such a variety comes an equally broad expertise within the vaults, which rarely change hands. Steven says that while there is plenty of healthy competition between the dealers, they also collaborate on items that are particularly rare.

“Obviously you have your own customers that you cherish, but we would definitely turn to each other for advice on certain pieces.

“There have been a few neighbourhood tussles over the years, but overall I’d say the atmosphere here is pretty good.”

All three admit business in the Silver Vaults has slowed somewhat in recent decades, with John estimating foot traffic has halved when compared with 20 years ago. Nevertheless, Steven maintains that consumer demand for silver has actually gone up.

“There are ups and downs, of course, and we rely greatly on returning business – without our old trusted customers we wouldn’t still be here,” he says.

“There’s been a resurgence in silver jewellery from some of the contemporary designers, which is appealing to a new buyer.

“Silver has always had great appeal, and I think people understand that it will always have a certain value, and down here we know the ins and outs of it, from start to finish.”