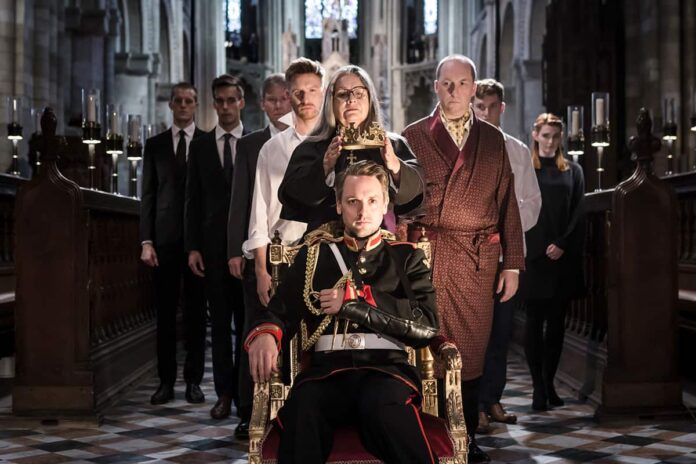 IT was always going to be controversial; staging an adaptation of Shakespeare’s Richard III in the place the 15th-century king was buried, with great fanfare, just two years earlier.

Theatre company Antic Disposition knew their decision to stage the Bard’s broadly negative view of King Richard’s rise to power so close to his final resting place at Leicester Cathedral would have its critics; historians denouncing the production as “disrespectful” and “inappropriate”.

And then there was the issue of staging the production almost exclusively in cathedrals around the UK; Peterborough, Ely, Leicester, Gloucester, Bristol, Salisbury, and finally Temple Church from early next month.

“There are people who don’t always like anything done in cathedrals other than worshipping,” one of the directors Ben Horslen told the Guardian back in May.
Sensitivities

And while audiences in Leicester were met with leafleting from the Richard III Society pointing out the differences between the Shakespare’s version of events and historical fact, reviews of the production have been overwhelmingly positive.

Speaking with City Matters ahead of the Temple Church performance, Ben says that he and co-director John Risebero had taken care to remain mindful of the sensitivities around Richard III, and separating fact from fiction, adding that they have been pleased with the reception so far.

“It’s a fairly straight rendition, there’s no reworking though we have used modern dress,” Ben says.

“Richard III was actually the very first Shakespeare play we did as a company back in 2006; this production is loosely based on that, but this version is much more informed by the current political climate.

“We set it now because this particular play is about a dark, power hungry, villainous tyrant, and I think this character has never been more relevant… there’s a lot of that going on in the world.”

Staging the play inside some of the UK’s oldest cathedrals has presented its own set of logistical problems, but Antic Disposition’s experience with historic buildings – they took Henry V on a tour of 12 cathedrals in 2015 – equipped them for the challenge.

Shakespeare’s quick spoken language has been slowed to account for the echoing acoustics, and the long, narrow aisles promoted a traverse staging of the play; the actors move from one end of the building to the other as the story plays out.

Richard III’s arrival at Temple Church next week will mark the longest run for the play in any one location, so audiences can expect amped up production values.

“We’re there for three weeks so we can occupy the building a bit more.

We’re going to have a much bigger lighting rig, we’re constructing a raised stage; everything is going to be a lot more theatrical.”

Antic Disposition has found success in London’s historic home of the law previously, having staged a musical adaptation of A Christmas Carol at Middle Temple Hall.

Of the production, which will be returning to the Elizabethan hall this December for a fourth time, Ben says that Dickens’ brief flirtation with the law before taking up writing installs the building itself as an important cast member, as with Richard III.

He goes on to say that it’s time cathedrals took on a greater role in the staging of contemporary arts and culture, rather than simply existing as places of worship or historical artefacts.

“These are buildings that have a cultural life, and we’ve found that by using a building in an unexpected way, you can encourage people to respond to a story in ways they might not in a standard theatre setting.”

Richard III is on at Temple Church from 22 August to 9 September.