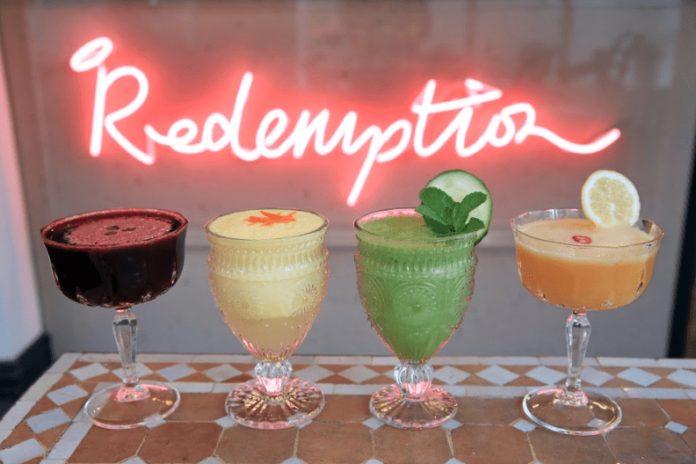 It’s still early on a Wednesday evening in January, but a bartender at a popular Shoreditch pub cuts a lone figure as he wipes a pristine counter yet again and listlessly fixes his two patrons another round of soda waters with fresh lime.

Staff at a nearby restaurant try in vain to look busy wandering around empty tables, but with no diners to take orders from, they eventually plop down to scroll through their phones.

It’s that time of the year.

Blame Dry January, Veganuary, New Year’s resolutions or festive season fatigue, the first month is notoriously the worst month for the hospitality industry as Londoners try to atone for December’s sins of gluttony, greed and who knows what else. That is, of course, unless you run a booze-free, vegan restaurant called Redemption.

“It’s like Christmas in here,” co-founder Catherine Salway trills as she finds us a spot in the small, bustling restaurant on Old Street.

“We had to limp our way through December, but that’s to be expected – the last few weeks have been crazy.”

Around us couples are hunched over marbled tables sipping mocktails, while groups are catching up over bright bowls of jackfruit rendang curry and quinoa, avocado and mushroom maki rolls in the glow of neon lighting.

There isn’t a drop of alcohol or a crumb of a complex carbohydrate in sight, but it feels like a standard night out in Shoreditch – and that’s the whole point.

Ironically, it was while dating an alcoholic that Catherine came up with the idea for Redemption, after she struggled to find venues they could spend time in without being surrounded by alcohol.

She teamed up with restaurateur, vegan and raw chef Andrea Waters to open London’s healthiest bar and restaurant in Notting Hill midway through 2015, followed by the Shoreditch site six months later.

From the black rice risotto to the date, banana and coconut banoffee pie, everything on Andrea’s menu is vegan, wheat-free, sugar-free and therefore guilt-free, but tastes as though it shouldn’t be.

“We tried to make the menu really accessible for vegan virgins, which is why there are ‘comfort’ foods like burgers and pulled pork – we like being that gateway to a healthier lifestyle without taking ourselves too seriously.”

And in the same way your mother hid vegetables in your spag bol, Andrea manages to pack dishes with nutrients that will do wonders for your insides. The Buff Burger is packed with protein from a shitake mushroom, black bean and ruby beet pattie, while the particularly pious Probiotic Booster Bowl aids digestion and boosts immunity with cabbage, celeriac and kohlrabi ’slaw with kale, dates and coconut kefir dill dressing.

“We didn’t want to just be all about removing things – even though that’s what a lot of people look for – so we’ve tried to focus on adding certain foods to make our dishes as nutritious as possible.”

Still, we look over at a guy dutifully tucking into his pulled barbecue jackfruit burger, washed down with alcohol-free artisanal lager FitBeer – how long will the health honeymoon last? This weekend? Perhaps the end of the month?

For her part Catherine says business is fairly steady throughout the year.

“We’re seeing the effects of January’s healthy eating lasting longer in the year; people at least keep some of their good habits – going meat-free a few days a week or not drinking Monday to Thursday.”

“Still, everybody falls off the wagon at some point and that’s fine too.”

After all, there’s always Redemption for those who seek it.