WHAT does Christmas taste like to you? Turkey with a sage stuffing? Cured salmon and capers with dill? A supermarket mince pie and a gingerbread-flavoured latte? Whatever your festive flavour, the Square Mile’s restaurants and eateries have risen to the occasion, delivering stand-out Christmas concoctions and seasonal set menus to...

WHAT does Christmas taste like to you? Turkey with a sage stuffing? Cured salmon and capers with dill? A supermarket mince pie and a gingerbread-flavoured latte?

Whatever your festive flavour, the Square Mile’s restaurants and eateries have risen to the occasion, delivering stand-out Christmas concoctions and seasonal set menus to suit all tastes, so there’s no excuse for filling up on stale chocolates from the office advent calendar.

We took a look at what’s on the menu at some of our favourite restaurants but act fast, most will disappear with Santa’s milk and cookies.

We Brits might favour a brined turkey on the big day but Indian tradition calls for a bit of heat. Dishoom’s take on the festive season stars the Turkey Raan – a whole turkey leg infused with spices, slow-cooked over a whole day until melt-in-your-mouth tender and served with fragrant Bombay-style potatoes, masala winter greens, and a spiced cranberry chutney. The bird comes plated up alongside biryani, chicken ruby, paneer tikka and daal on one very large plate, or Thaal – a Bohra feasting tradition that reinforces precious family and community bonds.
7 Boundary Street E2 7JE

Our first Christmas pate en croute of the season by @chefcalum, available on a la carte till the end of the year! … https://t.co/OzaX5p0biY pic.twitter.com/vl5me7NxSX

There aren’t very many things chef Calum Franklin can’t do with a sheet of pastry, but this festive treat really takes the cake, or should we say croûte? Organic Rhug Estate bronze turkey with smoked, sweet cured bacon, sage and onion boudin, truffle, and turkey and madeira jelly; it’s a pretty little slice of Christmas dinner all wrapped up in crisp, buttery pastry and served with cranberry sauce. Take yours with a winter cocktail in the Monkey 47 Winter Lodge and save room for one of Calum’s famous mince pies; thick, pork pie-style pastry with a subtly spicy filling.
252 High Holborn WC1V 7EN 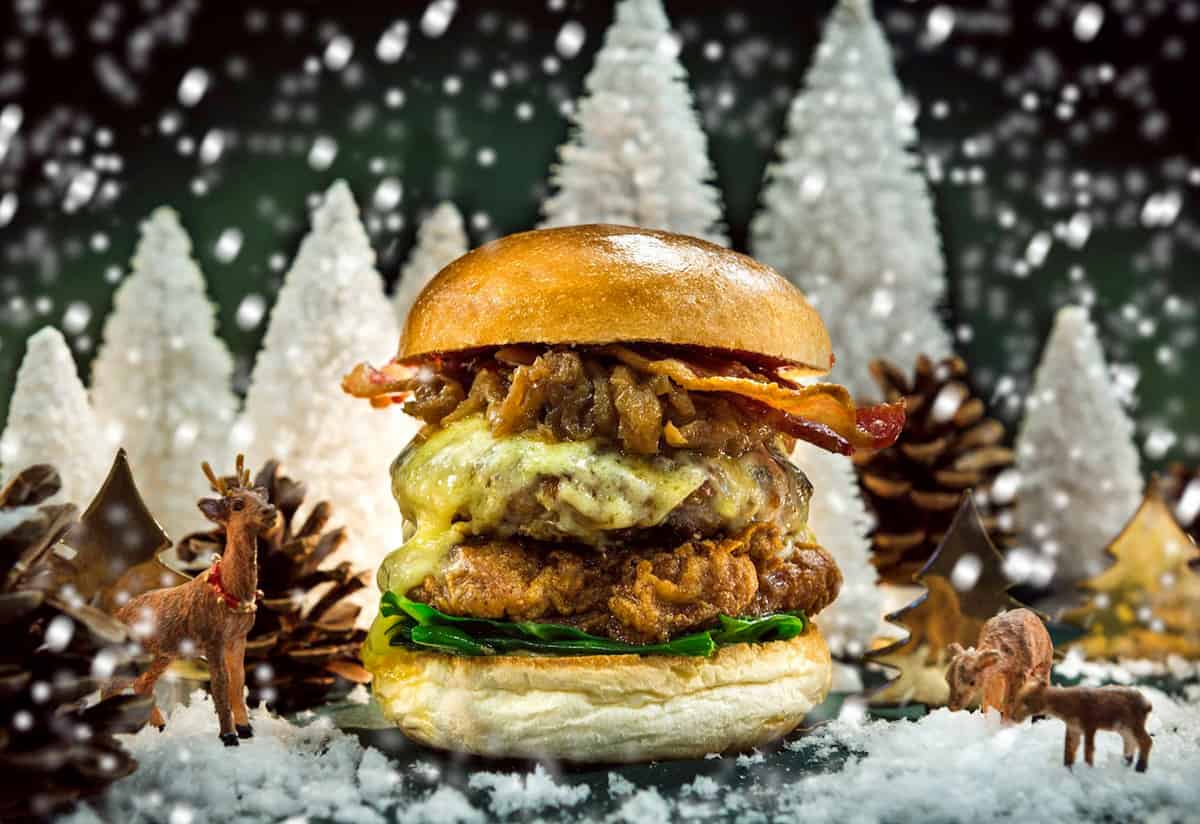 According to their Facebook page, Hawksmoor head honchos Will Beckett, Richard Turner and Huw Gott designed this beast of a burger a few beers in while waxing lyrical over the Pret Christmas Sandwich. Their submission to sit alongside Pret’s “cultural symbol of Christmas” (sorry Santa) combines turkey, sausage patty, bacon, cranberry sauce, and Ogleshield cheese in a soft bun served with roast potatoes and French dipped in turkey gravy so “it tastes like an essence of Christmas dinner”. Available exclusively at the Spitalfields restaurant – we think this one might have legs.
157b Commercial Street E1 6BJ

It would be a crime against Christmas to count calories this time of year, which makes it the perfect opportunity to pay a visit to Red Rooster, the Curtain Hotel’s outpost of the Harlem-born homage to Southern American soul food. Perhaps sensing that it is the season to loosen the belt, head chef Marcus Samuelsson is plating up a feast large enough to last you until the new year. Line the stomach with Harlem-style fried chicken and waffle and Uncle T’s Gravlax followed by roast turkey with the works – cornbread stuffing, cranberry sauce and sweet potatoes with marshmallows. Finish up with pecan pie and baked Alaska and a very long nap.
45 Curtain Road EC2A 3PT

Friday …. December 1st …. it must be the launch of our Xmas Burger 🍔👀🎉🌲💥❄️ parsnip and chestnut patty with parsnip tails, homemade stuffing and clementine mayo 👌 tomorrow @spitalfieldsE1 💓 pic.twitter.com/XXrACwuU0V

Let’s face it, traditional festive fare isn’t all that kind to vegans and vegetarians who by this point in December have quite literally had a gutful of nut roast and Brussels sprouts. Luckily, vegan burger truck Vurger Co has cooked up a Christmas version of their 100% plant-based burgers that captures all the flavours of the season sans animal by-products. The Christmas Burger is made from a roasted parsnip and chestnut patty topped with homemade sage stuffing, crispy parsnip tails slathered with chilli cranberry jam, and clementine mayonnaise, a combination to excite even the Grinch-iest vegetarian.
Old Spitalfields Market (next to Lululemon), 109 Commercial Street E1 6EW 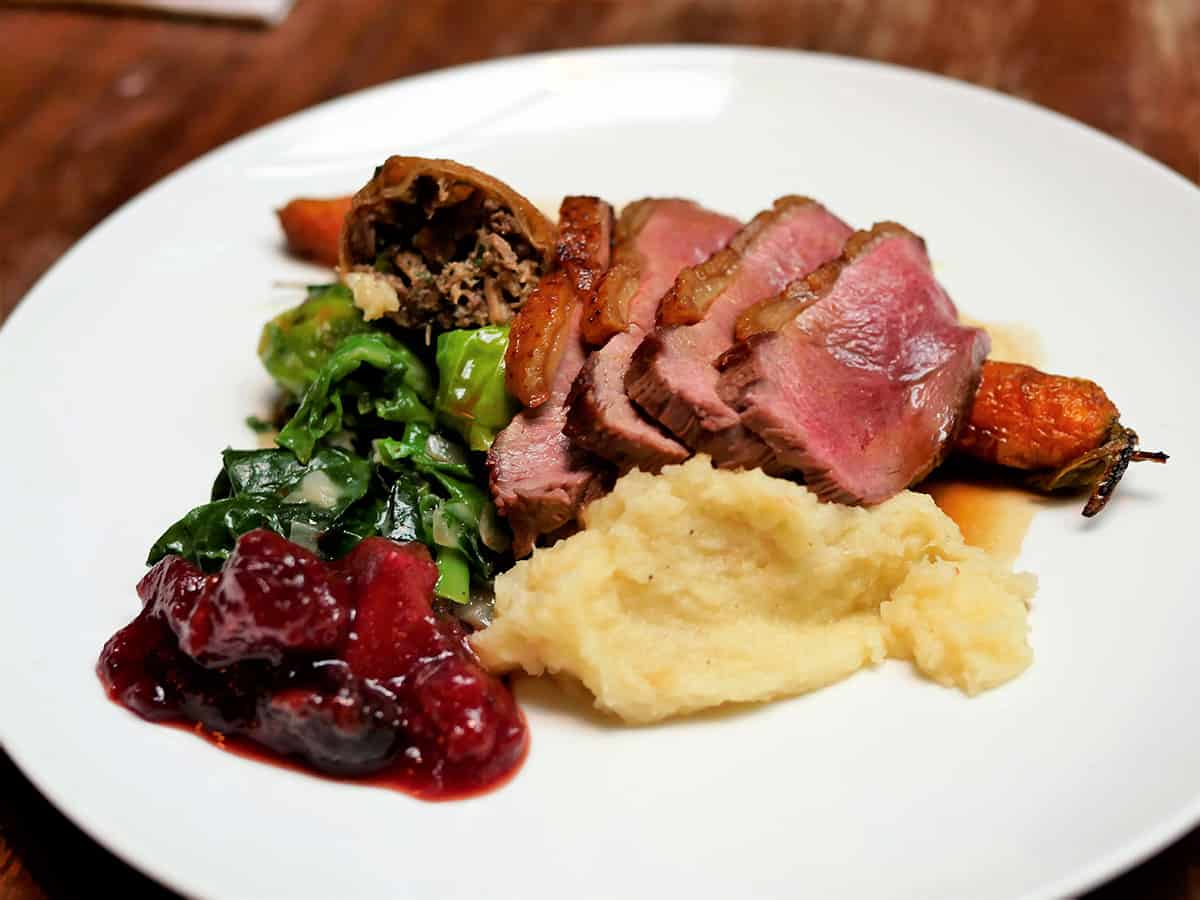 Angela Hartnett and Neil Borthwick built the Merchants Tavern menu around seasonal cuisine, so it’s safe to say they know what they’re doing in the kitchen at this time of year.
Park up at the Kitchen Counter to watch head chef Neil and his merry minions at work, plating up Christmas dishes like Jerusalem artichoke and apple soup, roast goose with all the trimmings (bottom right), and a Quince sherry trifle.
36 Charlotte Road EC2A 3PG