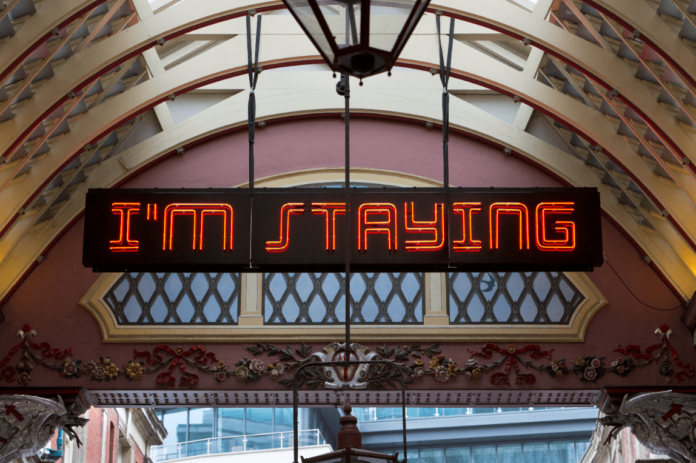 “I’m staying.” The words will be emblazoned across Leadenhall Market in bright orange neon for the next eight months, a lighting installation by artist Shaun C. Badham as one of 18 works of public art arriving in the Square Mile this month for the annual Sculpture in the City showcase.

It’s as though the piece was made for the Victorian marketplace, which stands resplendent in red and gold as a historic landmark despite being dwarfed by the surrounding skyscrapers.

In fact, it arrives in the City by way of Bristol, where it spent much of the lead up to the EU referendum getting its point across at different locations determined via the public. After the Brexit vote, of course, it took on shriller overtones.

It is in these contextual shifts that the City has proven itself a strong canvas for an exhibition of public art, according to Sculpture in the City co-director Stella Ioannou, and a big part of the reason the eighth edition will be its biggest yet.

“There’s something quite magical about this part of the City – it’s always changing so the idea of public space is constantly being challenged, but you’ve also got the most beautiful churches that serve as a reminder that this environment is grounded in history,” she says.

“One of my favourite parts of the job is taking artists around the City who haven’t been here before and watching them respond to it for the first time – it’s like taking children into a candy store.”

And the streets surrounding the Eastern Cluster will become a candy store for art lovers once the sculptures are officially unveiled on 27 June, a line-up that includes Sarah Lucas’ bronze Clydesdale Perceval parked off Lime Street and Sean Scully’s stack of blue hues outside Lloyds of London.

Paris-based sculptor Jean-Luc Moulène puts his stamp on the Leadenhall Building with Body, a svelte, highly-polished reflection on the human form, while Gabriel Lester’s The Adventurer muscles in on St Mary Axe.

Not bad for a little exhibition that started with four sculptures to brighten up a rapidly developing urban jungle.

Stella, a cultural consultant and founder of the London Festival of Architecture, teamed up with Simon Glynn, assistant director of City public realm at the Corporation, to roll out a programme of public art to help “humanise” the growing number of tall buildings in the Eastern Cluster.

They started with three local businesses supporting the exhibition. This year Sculpture in the City will have more than 20 partners for the programme; among them heavy hitters like Aon, Bloomberg, British Land, CC Land and Hiscox.

They support a growing education programme with local schools, and City SculptureFest, the first ever public launch event being held on 30 June featuring talks, tours and family-friendly activities in St Helen’s Piazza underneath the Leadenhall Building and the Undershaft.

“We felt like this is the year that so many of our goals for the show have been achieved; more commissions, locations and representation from female and emerging artists, so it was important that we celebrate that,” Stella says.

Despite this growth, Sculpture in the City will remain within the confines of the Eastern Cluster, the intention to increase the concentration of works within the exhibition area of Bishopsgate, Fenchurch Street and Bevis Marks so you will eventually see one artwork from the next.

“This is a project that is very specific to the area in its dialogue with the architecture – it can feel quite grey and cold and shiny; and art can humanise it.”

Still, it begs the question what place the exhibition will find within the City Corporation’s new public strategy for the Eastern Cluster, which will be released for public consultation this summer.

Suggestions to revamp the area to accommodate the additional 70,000 workers expected to flood in over the next decade have included pedestrianisation of streets, public greening and more cultural programmes, and perhaps even a name change.

All these hint at a much larger canvas upon which to paint the town, though Stella remains tight-lipped on how Sculpture in the City could be impacted by the changes.

However, there is certainly no denying that the Square Mile is making several strides to shrug off the blue pinstripe suit in favour of a more colourful image.

Stella’s former pet project, the London Festival of Architecture, has set up shop in the City with events in Guildhall Yard and St Paul’s and, of course, there’s the Corporation’s Culture Mile strategy to transform the stretch between Farringdon and Moorgate into an arts hub.

While these projects are likely to remain separate entities geographically, Stella describes them all as “singing from the same hymn sheet”.

“Both [Culture Mile and Sculpture in the City] are promoting the City as a cultural destination so they go hand-in-hand,” she says.

“To my mind, it’s all about engaging audiences: our aim for the London Festival of Architecture was to better communicate architecture and demystifying it.

“Similarly, contemporary art can be quite inaccessible, so by bringing these examples into public spaces in Sculpture in the City we’re removing that barrier of an intimidating gallery so that more people can discover it for themselves.”

Sculpture in the City officially launches on 30 June with City SculptureFest at St Helen’s Piazza from 10.30am to 4pm. Artworks will be on display until May 2019.