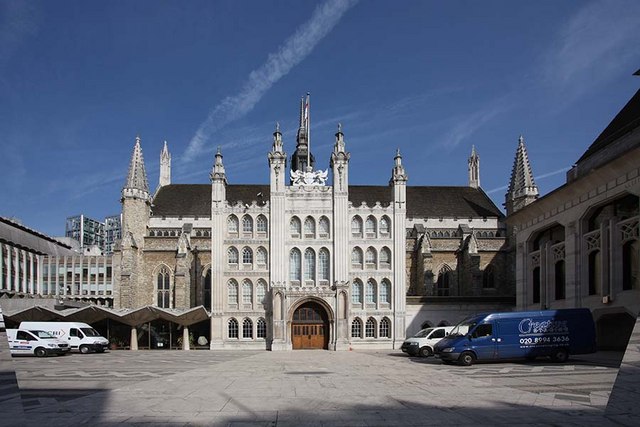 The City of London Corporation is no stranger to scenes of red robes, gold trim, furry hats, and sceptres at its 16th-century town hall – but its guests are being invited to dress a touch more casually from now on.

Fashion was the unlikely item on the agenda for members of the body that governs the Square Mile from the grand Guildhall as they approved a trial to break with centuries-old traditions, and relax dress requirements – for some.

Guests at its business evenings at Mansion House will be allowed to turn out in ‘lounge suits’ in place of black tie for the first time, councillors agreed – good news for fans of England manager Gareth Southgate’s dapper look.

British style and etiquette experts Debrett’s define lounge suits for men as anything from a waistcoat three-piece to a matching suit jacket and trousers ensemble that wouldn’t look out of place in the office.

But Sir Michael Snyder told the public relations and economic development sub-committee if they were going to talk about dress-codes, perhaps it was time for the City to reconsider its distinctive Aldermanic red robes, too.

“As much as they might like wearing lace, I think it looks silly if they have different dress from the rest of us,” he remarked.

Alderman Sir David Wootton replied that his fellows did tend to prefer to wear black tie for City events in place of their customary dress.

“In fact there has been comment from the Aldermen that they don’t get enough opportunity…” he began, before being cut off by Sir Mark Boleat and Sir Michael exclaiming gleefully from across the table: “To wear their lace!”

The question of business banquet and awards night fashion attracted a spirited back-and-forth among councillors on Tuesday who agreed it was time the City did away with the posher dress code for the dinners from March 2019.

While the City’s dress code concerns attracted some mirth on Tuesday, its members made the decision for change based on the Corporation’s recognition that changing fashions often reflected an increasingly diverse and equal society.

“Mansion House must be cognisant of ensuring that, whilst maintaining its status and influence, it reflects wider society, is inclusive and accessible and maintains relevance to modern society and business,” a report to the councillors said.

It emphasised dress codes today should avoid being discriminatory as: “Dress codes have evolved over many years and whilst still applied to many formal occasions, the contemporary view has flexed the more traditional codes to ensure that they are fit for the circumstance and occasion.”

However, with royals and diplomats to impress at its set piece events, white bowties – and the red robes and lace – will still be flourished around Threadneedle Street, as the Corporation restated its commitment to hat-tipping its customs – and, perhaps, the expectations of old-school City grandees.

Because Mansion House is the official residence of Lord Mayor Peter Estlin, and State banquets are attended by Heads of State and foreign dignitaries, it will still maintain a white tie dress code to maintain an image of “appropriate status and influence,” its report said.

What is a ‘lounge suit?’

‘Lounge suit’ is defined by Debrett’s as a flexible ensemble – a day-to-night option allowing the wearer to transition straight from work to events.

A businessman would be likely to choose a matching jacket and trousers worn with shirt and tie, in keeping with the style tens of thousands of City workers exhibit daily in the Square Mile, and Debrett’s suggests a three-piece waistcoat ensemble is also appropriate.

For women, Debrett’s recommends smart, or cocktail dress: “A neat, tailored look is best for business, with length on or just below the knee. A pretty print and a looser and longer silhouette works best in the country.”