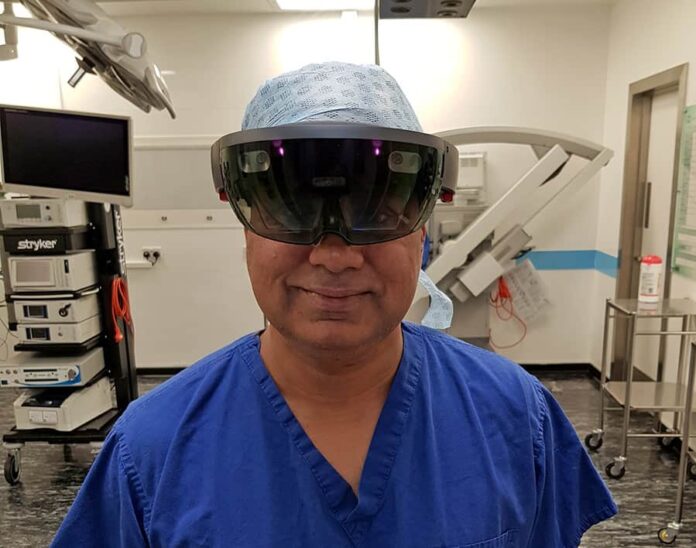 The Royal London Hospital has become the first to bring surgeons in different countries together to perform a live operation using virtual reality technology.

Three surgeons from London and Mumbai joined forces via Microsoft HoloLens software, to operate on a cancer patient in the East End hospital.

The three surgeons could see each other in the same operating theatre, as well as holographic images of the tumour and medical scans.

Mr Hitesh Patel said afterwards: “It takes a while to get used to but it was clear to see the other people involved as a hologram. It was an amazing way to interact with eminent surgeons across the world.”

Professor Ahmed has earned the nickname “the virtual surgeon”, for his previous work with VR technology, using Google Glass to transport 13,000 medical students from 115 countries into his Royal London operating theatre.

He said: “We have truly integrated technology with healthcare. By bringing together specialists in real time from across the world and different time zones we have demonstrated that we can make surgery safer and ensure the best patient outcomes.”

Professor Shrikhande, of Mumbai, said the technology had “revolutionising” potential for surgical training in his native India.

He added: “The platform is simply amazing but it would be even more fascinating a journey to see how this platform evolves to transform patient care across a vast country like India.”

Previously hospitals have been limited to the expertise of on-site surgeons.

With VR technology any surgeon, anywhere in the world, could potentially be available to lend their expertise to complex procedures.