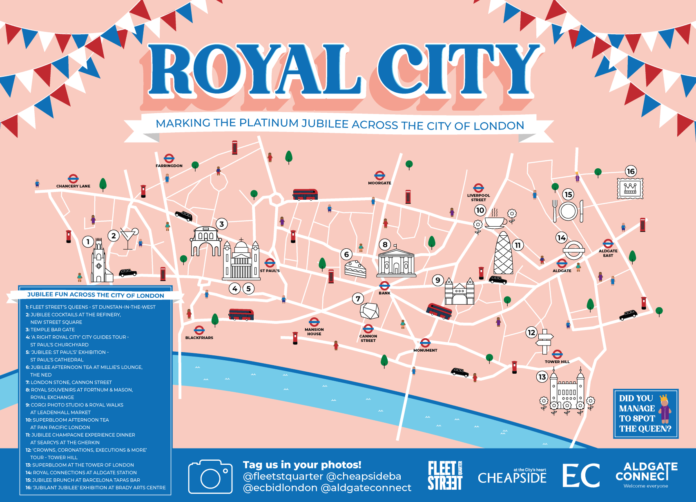 There are plenty of Jubilee festivities happening right across the City of London this month. Plan your visit now with our Royal City map (pictured)!

The Three Queens of Fleet Street
Find a statue of Queen Elizabeth I tucked away in a recess of St Dunstan-in-the-West, track down Mary Queen of Scots at a building next to Ye Olde Cheshire Cheese and head to the Temple Bar memorial for a carving of Queen Victoria.

‘Right Royal City’ – City Guides Tour departing from St Paul’s Churchyard
‘A Right Royal City’ will showcase the City’s rich royal history, allowing you to explore the streets that witnessed these events on a guided walking tour by the City Guides.
cityoflondonguides.com

Visit Temple Bar Gate
Once the ceremonial entrance to the City of London, you can now find Temple Bar to the north-west Tower of St Paul’s Cathedral, where it forms a pedestrian gateway into Paternoster Square. In a 400-year-old tradition, this is where the Lord Mayor presents the Sovereign with the keys of the City.

Jubilee Afternoon Tea at Millie’s Lounge, The Ned
On June 4, join The Ned for Afternoon Tea. Choose from a selection of cakes, scones, savoury bites and sandwiches, with a choice of tea and a glass of Nyetimber Classic Cuvée on arrival.

Jubilee Souvenirs at Fortnum & Mason, The Royal Exchange
Fortnum & Mason will be marking the historic milestone of the Platinum Jubilee with a range of exciting products.
fortnumandmason.com

London Stone, Cannon Street
Historic landmark, the London Stone, has an interesting royal connection. In 1450, an armed revolt rose against the unpopular King Henry VI. Legend has it that the revolt’s leader, Jack Cade, placed his sword upon the London Stone and declared himself ‘Lord of London’.

The Superbloom Afternoon Tea at The Orchid Lounge, Pan Pacific London
Guests will be treated to wine or a selection of teas, followed by British dishes including golden raisin and plain scones served with Cornish clotted cream, smoked salmon with mustard butter on brown bread and much more.
panpacific.com

Crowns, Coronations, Executions and More: Queens and the City of London
Join Six in the City for a tour exploring the Queens of England and the City of London. Discover the processional route of Anne Boleyn; hear the tale of Lady Jane Grey, and learn about Boudicca, Queen of the Iceni.
sixinthecity.co.uk

Royal connections at Aldgate Station
Her Majesty the Queen visited the station in 2010, where she was given her very own London Underground sign for Buckingham Palace.

‘Jubilant Jubilee’ Exhibition at Brady Arts Centre
Head to 192-196 Hanbury Street for a Jubilee-inspired exhibition by local people in Tower Hamlets. Work in this exhibition hails from a variety of classes run by local art tutor Virginia Hawke, and has been created in response to the wider theme of the Queen’s Platinum Jubilee.

More Jubilee events are being confirmed across the City of London. Check the BID websites and social media channels for more information.
fleetstreetquarter.co.uk
incheapside.com
ecbid.co.uk
aldgateconnect.london