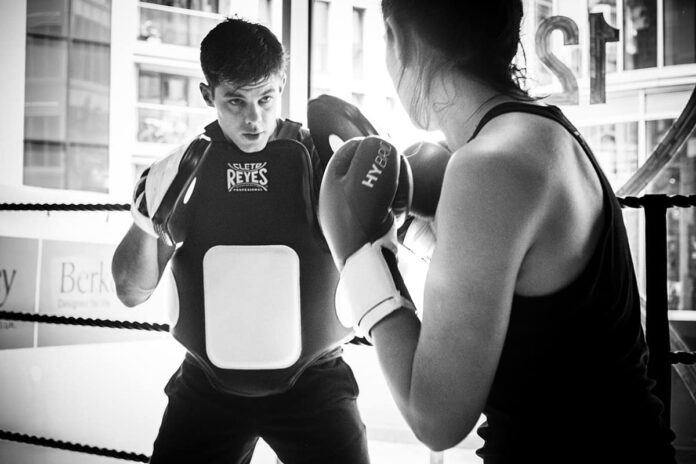 “If you’re going to make a move forward or left or right, you need to know what the next one is going to be.”

For emphasis, she demonstrates that by careering off to my left and dropping my guard, I’ve left my right side wide open for her to break my jaw. That doesn’t happen, of course, but I do get a punishment of five burpees.

“People come along for the first time and think they are just going to hit the bag really hard and that’s it,” Lisa says. “They have no idea of the importance of technique or the discipline and focus it requires to learn it.”

The “mind over muscle” mantra echoes that of Bethnal Green’s Repton Boxing Club, one of the few remaining old school gyms that cemented the East End’s status as the historical home of British boxing.

So it will come as no surprise to learn that the founders of 12×3 – Darren Barker and Ryan Pickard – are both former Repton boys, the former a world champion and the latter a youth Commonwealth Gold medalist who captained the club and England. In 2015, Lisa became the first female to box for Repton for the first-ever televised All Women and Girls Boxing Tournament.

The trio heads up an 11-strong team of decorated boxers that offer one-to-one or four-to-one coaching in the 12×3 format; 12 rounds of three minutes covering strength, agility, speed, stamina, timing and, of course, mindset. It is also the length of a title fight; the “boxer’s marathon”.

While training takes a traditional approach, the facilities take their cues from the boutique studios of 2017; “spit and sawdust” replaced by subway tiles and swanky shampoo.

It’s true the spoils are there to make the club less intimidating for beginners but Lisa says 12×3’s main point of difference is the coaches.

“[They] are all highly achieved boxers in their own right and also a friendly, welcoming bunch so it creates a warm environment for all ability levels to access that knowledge of coaching, it makes for a unique boxing experience – we welcome anyone and everyone.”

Inclusivity is something Lisa is particularly keen to stress as a female in a sport traditionally dominated by men.

“Unfortunately the gender gap is still huge due to old school mentality from the top overall, but it is changing thanks to big names,” she says, pointing to Nicola Adams – the first female to win an Olympic medal in boxing when it was introduced for women in 2012.

“This change is allowing women to aspire towards something in the sport and helping them open the doors necessary.”

And while the atmosphere at 12×3 is certainly friendly and accessible, we are here to work.

Lisa starts the session off with some good old fashioned jump rope – a warm up everybody has to do, even if they’re pro – followed by exercises to build basic footwork technique and agility.

Beginners will undoubtedly feel unnatural in the stance; the foot of your weaker side slightly in front and leading with your back foot to move, but Lisa is quick to correct form and so it’s easy to pick up, particularly with the threat of more burpees looming.

Then it’s time to punch something, with between four and six rounds delivering blow after blow to pads and bags. The combinations are kept simple so that beginners can build their technique; although actually nailing a jab-cross-slip-cross without punching Lisa (or myself) in the face proves a lot more difficult than it first looks.

I leave feeling as though I could barely pick up a chess piece, and already planning my next move; a return to the ring.