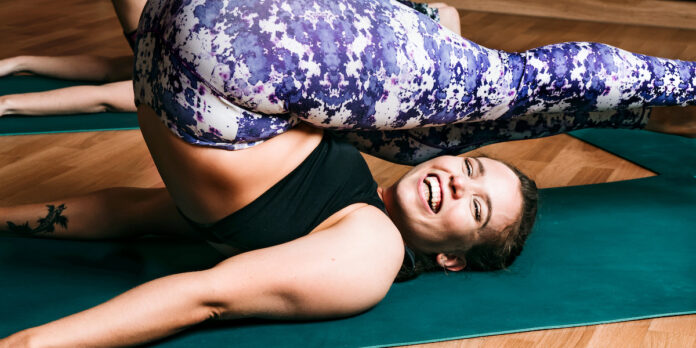 Yoga and lols – that pretty much sums up the new Laughter Therapy class at Gymbox.

And that’s exactly what a lot of us Londoners need. Life is stressful. It’s busy. And we all tend to take things a little too seriously. Taking 45-minutes out of the day to have a good old belly laugh with strangers is just what we need.

All the while working up a little sweat of course. Don’t come here expecting to show off with your handstands, or ability to turn yourself into a human pretzel.

This class is only loosely based on yoga. It’s a vehicle to get into some silly positions and have a laugh.

Throughout Gymbox’s class, you’ll move through some fairly simple yoga poses but there is absolutely no expectation to get your ‘form’ perfect. In fact, that is discouraged. Get yourself into a downward dog and then shake your butt about to the boppy music. Look around at others and giggle. It’s pretty damn simple – and you won’t get those ‘am I doing this right?’ feels as there is no one way to do this class. You’re actively making yourself look stupid. That’s the point. If you’re not feeling a little awkward then you’re doing it wrong.

This is such a foreign concept to so many of us Londoners. And it is an especially strange ethos to have in a gym like Gymbox. Too often there are too many people taking themselves too seriously in these kinds of fitness spaces. This can make gyms both intimidating and unapproachable. Laughter Therapy is the perfect antidote for this. Leave the gym junkies downstairs in the main area of Gymbox. They can lift their weights, run to techno music and take selfies in the mirrors. You, on the other hand, get to have fun with a bunch of strangers.

And, while those at reception might not be so friendly and helpful at times, the instructors for this class are absolute gems. They’ll lead the charge when it comes to being silly. Allowing you to follow and join in with ease. We see it like those fun dance classes popping up all over the Square Mile. But, for Laughter Therapy, you don’t have to follow difficult choreography – instead just roll around on the ground making strange sounds and shapes.

Laughter yoga has so many benefits for the body and mind. First off – the easiest one – it reduces stress. Stress hormones decrease rapidly as you giggle, cackle and do some proper deep belly laughs (be they forced or natural). Simply thinking of a happy memory will have similar effects.

And laughing like this triggers the release of endorphins which are body’s natural feel-good chemicals. Endorphins promote an overall sense of well-being and can even temporarily relieve pain which is a massive win for some. It even gives your immune system a good boost by increasing immune cells and infection-fighting antibodies in your system. That’s right- you can fight off the flu with a good giggle.

Laughter Yoga is also a powerful cardio workout. Just 10 minutes of hearty laughter is equal to 30 minutes on the rowing machine.  And let’s be honest, who of you out there really enjoys a hard cardio workout? And, as you are still doing yoga, you’ll get to stretch out your body and work out all those kinks in your back and joints. Who knew you could get so much out of being collectively silly?

Gymbox membership starts at £73 per month and to take a class without a membership you will have to buy one of their day passes, which cost £20. Otherwise, all classes are included with monthly membership. With this day pass you get access to all classes  running that day and can take advantage of the fairly luxurious member facilities.