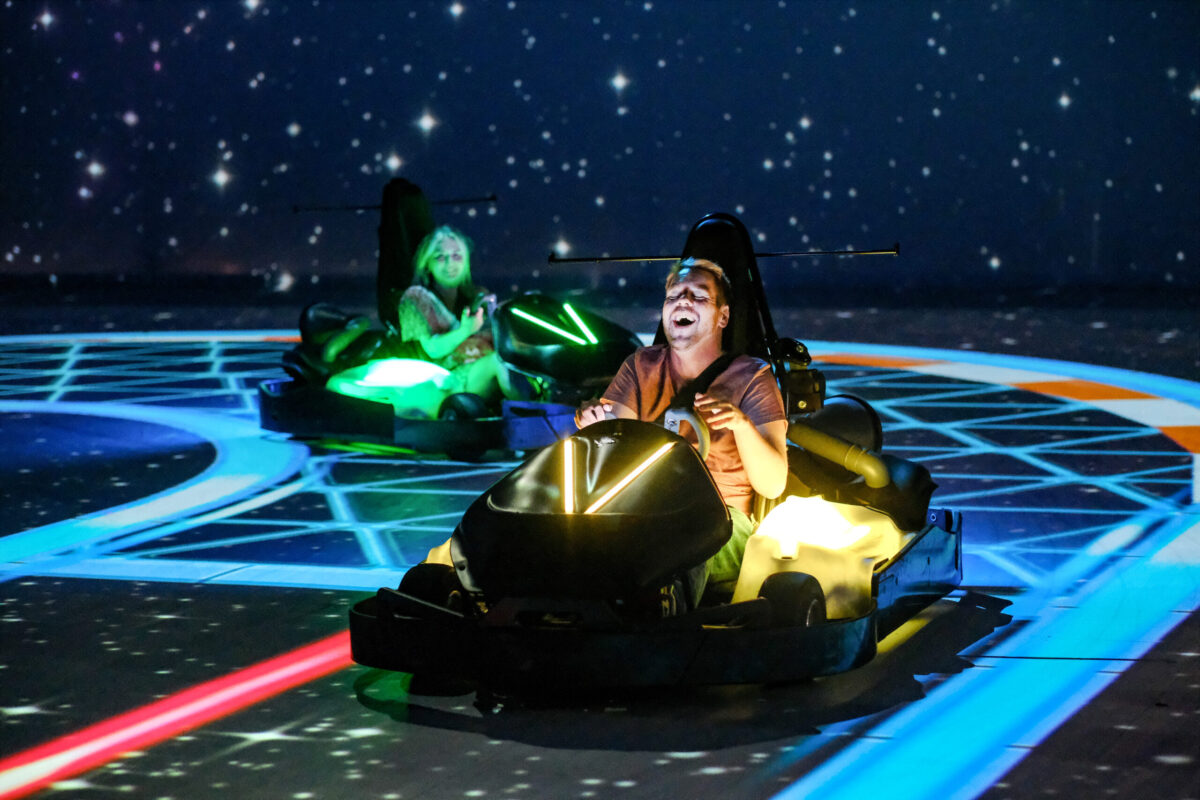 We’d never done anything like Chaos Karts before. This kind of augmented reality gaming just doesn’t exist anywhere else. At least, not that we’ve seen.

Within their massive shed by Brick Lane, there is a huge empty room with go-karts lined up against one of the walls. It feels a bit creepy at first – being led into a dark, cavernous room by strangers. But then the game technician turns everything on.

All around the shed, lights and images flicker on. The walls become cartoon beaches with mountains and palm trees, while a track appears across Chaos Karts’ shed floor. And music starts playing – very reminiscent of that famous Nintendo game that this is based on, but is never directly mentioned.

Everyone jumps into their own vehicle, but these aren’t your usual go karts. The Chaos Karts team have kitted them out with controllers and a computer screen.

You’ll drive around the virtual course, picking up items that will pop up on your screen.
And because each kart is individually tracked by all the sensors kitted out on the ceiling, you’ll be able to interact with all the other drivers within the augmented reality.

It’s way too much fun. You are physically driving around the illuminated course, picking up some real speed, all the while attacking everyone else in the game. And, because you’re tracked, it knows when you go off the road.

So, it will slow your kart way down. And, when you’re hit by an attack, your kart stops for a few seconds. It’s exactly like Mario Kart – but IRL.

Although, unlike the original Nintendo game, Chaos Karts isn’t about coming first in the race. We think that would become a bit dangerous – with everyone bumping into one another.

So, instead, you race for the most points in each three-minute race. Pick up gems dotted about the course, and attack others to build up the most points. This is the technical aim of the game, but we spent most of the time just trying to go fast, attack one another for the sake of it and scream manically. Again, this is insanely fun.

NOW READ: Review: Beano: The Art of Breaking the Rules at Somerset House

And during your visit, you’ll play on four different courses – each of which gets more difficult as you go on.

We were especially excited about the final two courses. The projectors made the entire shed look like space – with the course floating among stars, planets and asteroids. It’s pretty trippy. Just be sure to look out for changes to the course – hidden routes, items and so on.

But this technology is still in its infancy. You might experience a few glitches here and there. That’s all part of the experience of doing something so experimental.

Because, even with a few interruptions, you’ll be coming back and back again – even begging your bosses to book the place out for work social events.

Clearly, we’re already obsessed with Chaos Karts. The blending of real life go-karting with augmented reality technology makes for an insanely cool experience. And, with this kind of tech improving exponentially over time, Chaos Karts is only going to get even better.
Fleet Street Hill E1 5ES
chaoskarts.com