The winner of a competition to redesign London’s oldest public park will transform it into a ‘haven for people and wildlife’ featuring a multi-purpose pavilion. Hackney-based Architecture00 + Studio Weave (00SW) with ReardonSmith Landscape was selected from a shortlist of five in a City of London...

The winner of a competition to redesign London’s oldest public park will transform it into a ‘haven for people and wildlife’ featuring a multi-purpose pavilion.

Hackney-based Architecture00 + Studio Weave (00SW) with ReardonSmith Landscape was selected from a shortlist of five in a City of London Corporation competition to redesign the Grade II-listed Finsbury Circus Gardens, in the Square Mile.

The winning design features biodiverse habitats, new paving and seating and an expansive lawn overlooked by a new garden pavilion its architects envisage as an ‘active cultural hub for everyone’.

The park, the City’s largest open space, reopened to the public in August with a temporary lawn after being closed for a decade to allow Crossrail to work on a section of tunnel between Farringdon and Liverpool Street.

Oliver Sells QC, Chairman of the City of London Corporation’s Open Spaces and City Gardens Committee, said: “The winning bid very successfully captured our vision for a biodiverse, 21st century park which respects the historic nature of the site and complements the buildings that surround it.

“The redesign will restore the park to what it has been in the past – the jewel in the crown of our City Gardens and an urban oasis accessible to all, where people can come to exercise, socialise and relax.”

The proposal, subject to design development, will see an ‘urban forest’ created in the shaded west of the two-acre park, skirted by a new oval-shaped pathway inside the existing Yorkstone-paved outer ring, which will be retained.

The one-storey garden pavilion, built from natural materials such as stone and terazzo and capable of seating up to 100 people in its cafe and hosting events, will be sited in the sunny north east of the site.

The structure, nestling in a ‘secret garden’, will boast an openable frontage and terrace overlooking the lawn, while the park’s Grade II-listed drinking fountain dating back to 1902 will be re-sited nearby. 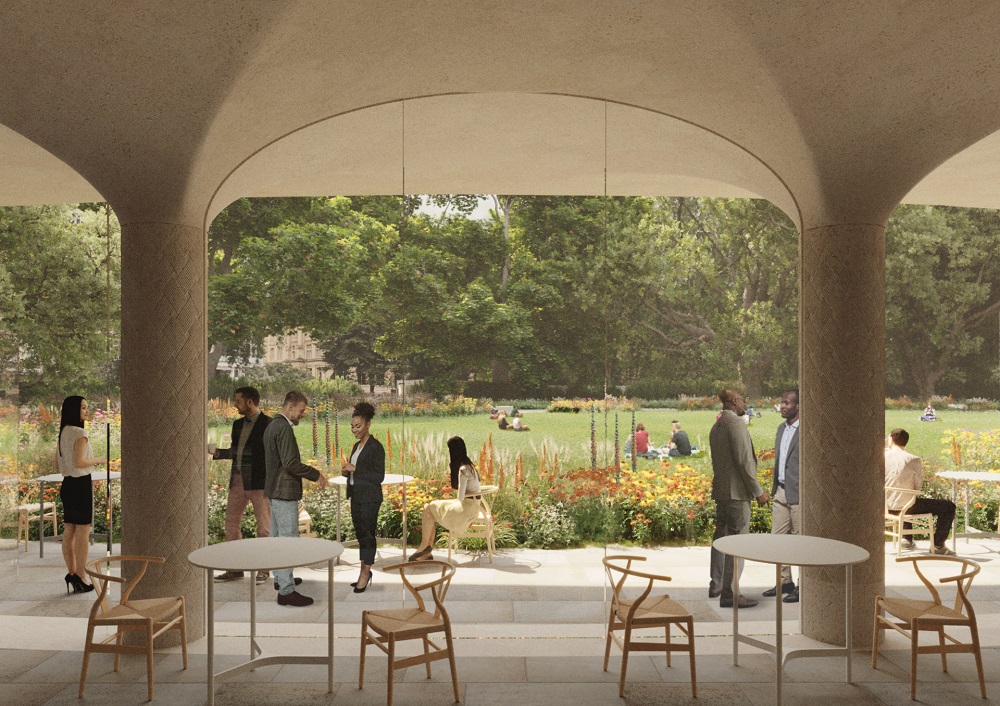 Je Ahn, Director at 00SW, said: “We are excited to be working on this historic site, which is the largest and oldest public open space in the City. Our proposal builds on the existing history of the garden and is influenced by the magnificent architectural context of its surroundings.

“Working with the dedicated client team and an engaged multi-disciplinary design team, we will deliver a holistically sustainable project that complements its setting and our shared vision of the 21st century City.

“00SW have extensive experience delivering award-winning architecture and public realm projects in London – and have a specific focus on improving access to and provision of civic space. We are local to this part of the city, and are honoured to be able to contribute to its ongoing development for the enjoyment of all of its users.”

Ed Freeman, Principle Partner at ReardonSmith Landscape, said: “It is a great honour to be given the opportunity to sensitively renew and shape this unique green space for future generations to enjoy. We look forward to working with the City and its stakeholders in delivering the project.”

Finsbury Circus Gardens, which is listed on Historic England’s Register of Parks and Gardens, dates back to 1606 and has been in City Corporation ownership since 1812.