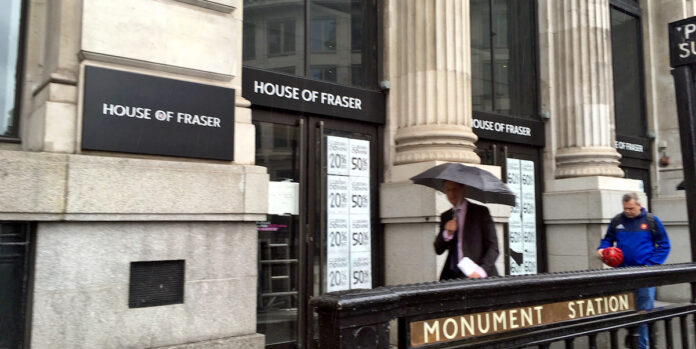 The team behind upmarket West End restaurant The Wolseley are planning to bring their own brand of glamour to a former City department store.

Restaurant company Corbin & King has applied for a new premises licence for ground and small mezzanine seating at the former House of Fraser store on King William Street, which has a commanding position facing London Bridge.

The closure of the department store – one of 31 throughout the country – was announced last June, and doors closed for good in December.

House of Fraser was bought out of administration by Mike Ashley’s Sports Direct in August, but the City branch was not one saved from closure.

Now upmarket Corbin & King has asked for a licence from Midsummer’s Day (21 June) for its new venue.

Craig Baylis, from law firm Bryan Cave Leighton Paisner, said it runs “a number of high end restaurants in the City of Westminster, such as The Wolseley in Piccadilly, The Delaunay in Aldwych, and Brasserie Zedel in Sherwood Street.”

Dishes on the menu at The Wolseley include oysters and caviare, as well as steak, omelettes and escargots. In paperwork supporting the application Mr Baylis said the new venue will be a “flagship restaurant” in the City of London and will “operate on similar lines”.

According to application papers lodged with the City of London Corporation the company plans that “substantial food will be served at all times”.

Alcohol will only be offered as “table or bar service – patrons will be seated”, the application added.

Licensees will also take “all appropriate steps” to make sure nearby businesses or residents will not be disturbed, and staff will “continually exercise supervision” to ensure this.