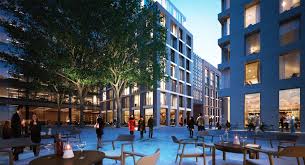 A popular vegan restaurant operator’s bid to expand into London has been met with opposition from residents, who fear a growing number of eateries will turn their neighbourhood from “tranquil” to noisy.

Stem and Glory representative Liam O’Hare said the Cambridge restaurateurs had been looking for a London location for two years and had been attracted to the “intimacy and village feel” of Middlesex Close.

However, 15 locals objected to the licence application, saying they feared another eatery serving alcohol in their “peaceful” inner city neighbourhood would bring nightly noise.

The promotion of a healthy, plant-based lifestyle was at Stem and Glory’s core, Mr O’Hare told concerned residents and City licensing bosses.

“The customers who come in here would quite literally not hurt a fly,” he said. “This is not going to be a cacophony and to paint it as such is incorrect. This will be a mindful eating, vegan restaurant.”

Resident Brendan Barns said while he thought it sounded like a “cool restaurant” and he liked to think vegans were “mindful” people, they were also Londoners.

“The fact is that people in London who don’t eat meat don’t necessarily behave like that – and that’s not within your control.”

Stem and Glory’s move into London has been eagerly anticipated, with an investor crowdfunding campaign raising just over £616k.

Mr O’Hare told the City’s licensing subcommittee Stem and Glory was anxious to have a “good relationship” with local residents, and to uphold strict noise and customer dispersal plan.

He added alcohol was expected to form only about 17% of the business. Stem and Glory would sit amid the Smithfield Conservation Area, opposite the Butcher’s Hall pub and Wright and Bell restaurant.

The area, noted for St Bart’s Hospital, the St Bartholomew-the-Great Churchyard, and Little Britain street is unique for escaping substantial damage in both the Great Fire and the Blitz.

The restaurant is the latest hopeful tenant of the three-acre Bart’s Square development, which has produced hundreds of new apartments in the City.

Mr Barns told the hearing that residents’ concerns were not focused on the style of restaurant, but on the transformation of their “quiet and peaceful” neighbourhood.

“Late night drinking dens” were not included in the plans for Barts Square, claimed one.

Another called the new bars and restaurants a “complete surprise” to locals, saying the neighbourhood was being transformed from residential to “recreational.”

However, a Barts Square representative told the hearing they were actively trying to avoid noisy establishments – deliberately choosing a vegan restaurant and not a sports bar as it was “the most community-minded use we could find”.

The restaurant’s proposed closing hours of 11.30pm Monday to Wednesday, midnight from Thursday to Saturday, and 11pm Sunday, with daily outdoor table service until 10pm.

Some residents wrote saying the noise of guests leaving late would echo down the Middlesex Passage route to the Farringdon Station. Resident Ann Holmes told the hearing the restaurant could keep its windows closed, have one point of exit, and not serve outdoors to address the issues raised by neighbours.

A decision on the application was deferred for Stem and Glory to provide required fire safety information.