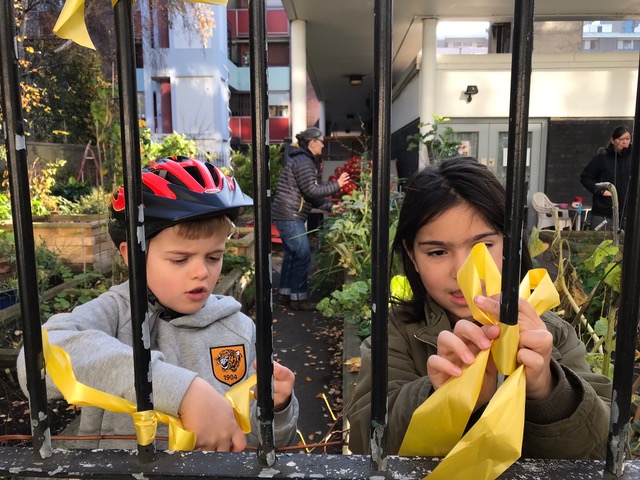 Golden Lane residents are up in arms over the latest attempt to fell a number of trees on their estate.

Campaigners believed the matter settled in the summer when a condition in the application for the City of London Academy Islington (CoLPAI)and a new residential tower block stipulated the preservation of semi-mature silver birch and cherry trees on the western edge of the estate.

At the time, more than 550 locals had signed a petition demanding the flora remain rooted in place, with local children lending their support to convince planners of their value to the community.

However, a recent U-turn means that the future of the trees is once again in doubt, sparking an angry response from residents.

A statement from the Golden Lane Residents’ Association (GLERA) said the way the City had conducted itself during the process “brings them no glory”.

It added: “Despite promises made in the summer, after the well supported Save Our Trees campaign showed just how important these trees are to the community, CoLPAI are now arguing the trees need to be destroyed despite agreeing to the planning condition that they be retained.”

The deadline for comments is 29 November, but residents have accused the City of withholding key information from a survey carried out to determine the practicalities of preserving the trees, denying them the chance to make an informed decision.

“The CoLPAI development will have a major impact on the estate, and although in the long run this may well turn out to be for the better good, in the meantime it’s important that we hold the City to account and ideally force a complete culture change in the way that they communicate with residents – we have a right to expect them to be open and transparent and to take legally required consultation seriously, not treat it as a mere box ticking exercise.”

A City of London Corporation spokesperson said: “An application has been submitted to London Borough of Islington and the City Corporation for the removal of the trees and their replacement with other trees.

“The application is currently being considered and will be determined in due course.”