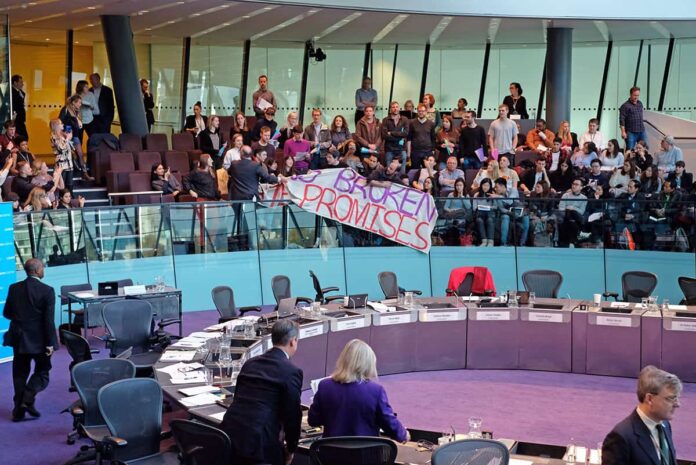 As he took his seat, angry members of the public unveiled a banner and placards criticising Sadiq Khan for “broken promises” on manifesto pledges.

He and other assembly members promptly left the chamber as security personnel attempted to remove the campaigners.

But during the ruckus, Conservative member Andrew Boff returned to the chaos to confront the infiltrators, calling them “middle class bullies”. Mr Boff later apologised for his comment.

Lila Nimac of Divest London, one of the groups involved in the stunt, said:

“Our aim was to highlight the fact that Sadiq Khan was elected by Londoners to do two things.

“One was a public energy company which was run by Londoners on renewable energy; and the other was to divest the London Pension Fund Authority from fossil fuels.

“He’s done neither and he’s greenwashed both of those promises.”

Ms Nimac added it was “shameful” that the Mayor walked out and refused to address the protesters.

Fellow campaigner Gabriel Davalos accused Mr Khan of reneging on promises made while on the election trail.

He added: “We are trying to get the London Pension Fund Authority (LPFA) to divest from fossil fuels.

“These are risky investments and investments that support climate change… What’s so disappointing is he made a lot of promises before coming to office, promises which we met with positivity, but he hasn’t made good.

“This has been a three-year campaign but we haven’t seen the movement the city deserves, the pensioners deserve, or the planet deserves.”

The Mayor maintains he is committed to making cheap and clean energy available to Londoners. A spokesperson for the administration said the Mayor will “fulfil
his manifesto commitment” to divest the LPFA from fossil fuels by 2020.

A statement added: “Sadiq believes that the new LPFA climate change policy is one of the strongest and most sophisticated of any city in the world.”

The protesters were non-violent, however when they refused to leave the chamber a struggle ensued with security.

Emma Hughes of Switched On London saw it up close. She says punches were thrown, adding: “We were basically dragged out very roughly by security; one member of us was assaulted.

“It was completely unnecessary and uncalled for. We are people, we are Londoners who wanted to speak to Sadiq Khan for less than five minutes.”

A spokesperson for the GLA said:

“Today’s Mayor’s Question Time was disrupted by a number of protesters, forcing the meeting to be suspended for a few minutes. Security officers removed protesters from City Hall so that the session could continue.”

It is the second time in a matter of weeks that campaigners have targeted central London for a significant protest.