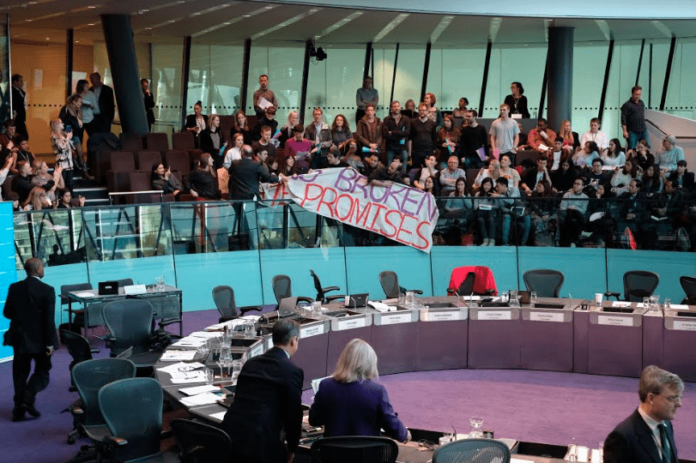 MAYOR’S Question Time was brought to a standstill when 50 furious protesters barraged Sadiq Khan over “broken promises” in his manifesto.

Mr Kahn felt the ire of members of groups including the Greater London Pensioners’ Association and Fuel Poverty Action, who took over City Hall’s chamber, filling it with hundreds of paper planes containing messages for the Mayor.

In a statement campaigners said they assembled to remind Mr Khan of two of his “biggest environmental promises”; to set up a public energy company to provide London with affordable, clean fuel; and to fully divest the London Pension Fund from fossil fuels.

“Sadiq Khan was elected Mayor on the back of two big environmental promises: to set up a public energy company that gives Londoners clean, affordable fuel and to divest the London Pension Fund from fossil fuels. Over a year in office and he’s broken both,” said Emma Hughes, a Switched on London campaigner.

“Today we’re taking back City Hall to tell the Mayor to keep his climate promises.”

Dan Goss, Fuel Poverty Action organiser, added: “We all know how high London’s energy bills are. The Big Six’s astronomical profits mean that over one million Londoners can’t afford to keep warm in their own homes.

“If Sadiq Khan is serious about tackling fuel poverty it’s time he took money out of oil and gas and put it into a clean public energy company that brings down bills.”

The intervention took place on the penultimate day of the Mayor’s environmental strategy consultation and coincides with the UN Climate Negotiations in Bonn, Germany, where government representatives are discussing their commitments under the Paris Climate Agreement.

It is the second time in a matter of weeks that campaigners have targeted central London for a significant protest.

At the time, spokesperson Livia Woolf promised more action if the government and City Hall failed to address the Capital’s toxic air.