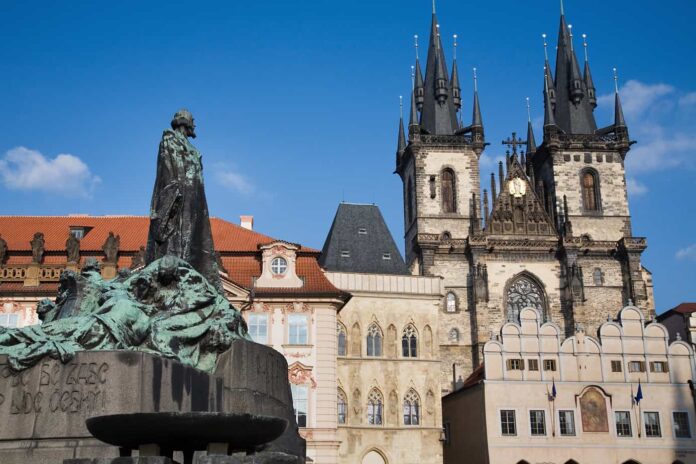 Photoshop out the mobile phones, cans of Coca-Cola and designer labels, and a snapshot of Prague’s narrow streets, framed by enduring Baroque buildings, bears a striking resemblance to images found in the ‘Life in the Middle Ages’ chapter of an old school textbook.

While the beheadings have long since ceased, there is still plenty to turn heads in the fairy-tale surroundings of the Czech capital.

Indeed, the enchanting ‘City of 100 Spires’ is nothing short of a feast for the eyes; a dream come true for romancers of Art Nouveau and Art Deco, with heritage in abundance in every crevice – Prague fortunate to have never been decimated by the wars of the 20th century.

The opulence of the city, however, does not lend itself to a smooth flowing crowd, with many a gaze fixed on the painstaking detail of the structures painted against the skies above.

So, with that in mind, we’ve listed some of our favourite sights certain to stop you in your tracks during your next foray to Prague.

Wenceslas Square: A bit of a misnomer as the ‘square’ is most definitely rectangle in shape, but technicalities aside Wenceslas Square is a vibrant hub of bars, restaurants, shops and museums that marries Prague’s rich history with global consumerism.

In the modern era the space has been used for both commercial ventures and activism – only some 30 years ago protestors stormed the square to protest police brutality and overthrow Communism – but its creation as a modest horse market dates back to 1348 to the rule of Bohemian King Charles IV.

It was given a more lofty and befitting title during the Czech national revival movement in the 19th century, the same time a monument depicting St Wenceslas – suitably on horseback casting his gaze down the square – was installed.

Kostel Panny Marie Pred Tynem: If Mary Shelley did churches, this is what we’d end up with.

Straight from the pages of a Gothic thriller Kostel Panny Marie Pred Tynem is one of the most papped structures in Prague; it’s two spires equal parts resplendent and intimidating above the streets of Old Town. Built in the 14th century, it served as the primary place of worship for foreign merchants visiting the city.

Charles Bridge: Traversing the River Vltava, Charles Bridge has provided safe passage over the river since the time of Charles IV.
Adorned by statues of saints – added from the late 16th century onwards – the sandstone crossing connects Old Town and the Little Quarter and, at 520m in length, is nearly 200m longer than the Shard is tall (310m).

Those making the trip from the Little Quarter will approach towards the Old Town Bridge Tower, a 14th-century ornament that was once integral to the City’s fortifications but is now a great photo op.

Prague Castle: The oldest ancient castle still standing, according to the Guinness Book of Records, Prague Castle sits proudly above the city it shares a name with.

The 9th-century citadel welcomes 1.8million visitors each year and is widely recognised as being the first word in Prague’s history.

A palace, monastery and three churches all reside within its walls and, despite extensive rebuilding in the 1500s after a fire ripped through the grounds, the castle remains the seat of the country’s rulers, in this case President Miloš Zeman. Even though politicians get a bad rap we don’t imagine there are too many jesters running about the place in 2018.

St Vitus Cathedral: John of Luxembourg is the king credited with ordering the construction of one of the city’s most distinct landmarks in 1344.

But nor he, his sons, or even their sons would see it completed, the final brick being put in place hundreds of years later in the 20th
century. Now the cathedral is home to the crown jewels and the tomb of ‘Good King’ Wenceslas.

Since it took so long for architects to finally sign off, allow yourself plenty of time to gaze at the richly-decorated, jewel-encrusted interior.