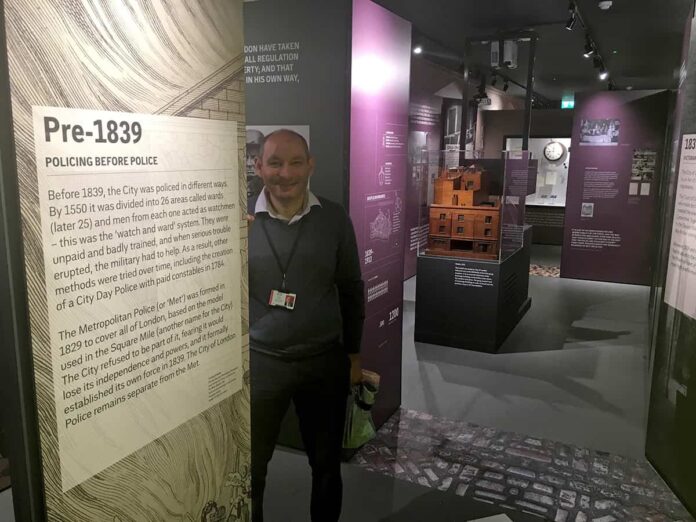 When the City of London Police Museum moved from its cluttered base in Wood Street to a spacious new home at Guildhall Library in November, the aim was to breath fresh life into its exhibitions.

Among the immediate challenges for project manager Seif El Rashidi was to trim the ‘historical fat’ that had been collected over the years, streamlining the exhibition to paint a narrative that tells tales from the beat dating back to the 19th century.

Now, nearly a year on from the relocation, Seif is preparing to unveil an added nuance to the museum; eye witness accountants from some of the first responders on scene at major incidents in the City.

“As generations move further away from the time of significant incidents it is important to present the human aspect of the scenarios,” he explained.

Interviews have been conducted with around 20 former officers, with one particular recording focusing on the IRA blast at the Old Bailey in March 1973.

“The move from Wood Street was seen as a chance for a new beginning and we spent a long time working on how we could make the most of the time and resources that had been spent rejuvenating the gallery.

“We wanted to create an audio experience that added personal stories to the narrative, showing exactly what it means to be on the beat and how the role has changed but also how it hasn’t.”

Seif says that the museum has proved particularly popular with students, most notably those stopping into the UK from America to continue their studies.

Not even a full year in their new home and Seif has already welcomed eight tours made up of solely American students.

“We find a lot of interest comes from people on law, crime and policing courses – it makes for an exciting field trip.

“But in light of recent events regarding terrorism (two attacks in London and one at a concert in Manchester) what is striking to them is the relation to firearms we have here in the UK. As a US cadet the first thing they are taught is how to operate a gun and that poses an interesting question in itself.

“Some are more reassured when they see armed officers, but others say that guns will lead to more violence.

“Periodically the issue flares up and there is always a lot of talk about whether policing should be handled differently; this is why the museum is so popular.”