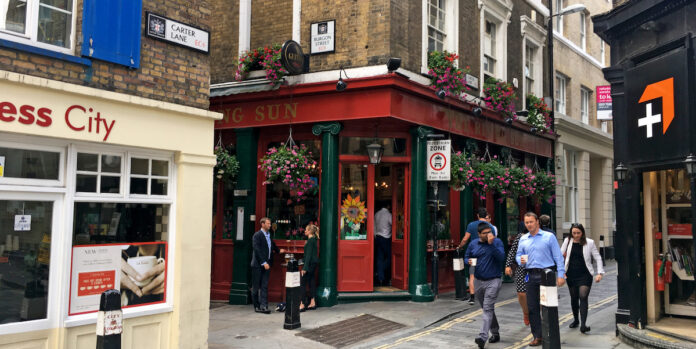 Cycling tour groups could be made to dismount near St Paul’s Cathedral after reports of “conflict” between cyclists and City workers.

It is claimed groups of up to 20 cyclists are irritating pedestrians by careering through Carter Lane, about 30metres from the Grade-I listed landmark.

They are said to prefer dodging Queen Victoria Street and other busy main roads to avoid buses, cars and lorries.

“Over the last couple of years we have heard reports of one person being knocked down off their feet and some near misses of a similar nature,” said City of London Corporation deputy Clare James.

“Cycling down Carter Lane is perfectly legal, but the risk of cyclists and pedestrians coming into conflict in a narrow lane such as this are exacerbated where the person cycling may not be an experienced cyclist.” A City Corporation meeting on 30 July heard that tour companies – including Breakaway Bike Tours and the London Bicycle Tour Company – have responded “positively” to plans for a code of conduct.

Road danger reduction manager, Rory McMullan, told the meeting: “We’re proposing that at lunch times and where there are a lot of people walking, the tour groups dismount and walk down the street.

“Out of the four tour groups we have contacted, they have all responded positively or said they will look into this.”

Following the meeting, Tanja Goossens of London Bicycle Tour Company said: “We have been in a meeting with the Corporation to talk about pedestrian safety and have agreed to work with a code of conduct. We will now only use Carter Lane once in each route and will dismount.” Lined with pubs and bars such as the Rising Sun and Patch St Paul’s, and several hotels and hostels, Carter Lane is currently semi-pedestrianised. Cars and cyclists are not permitted before 6pm.

Councillor Marianne Fredericks said Carter Lane should be fully pedestrianised. She told the meeting: “Quite frankly it’s reached the point where traffic shouldn’t be allowed down there unless it’s collecting rubbish, because it’s used so much by pedestrians.”

There were also calls for people riding electric scooters – or e-scooters – to also be brought to heel.

Councillor Sylvia Moys said: “Could we develop a code to incorporate electric scooters?

“Because these too are pretty awful when you come up against them, quite apart from skateboards.”

Breakaway Bike Tours were approached for comment but did not respond.