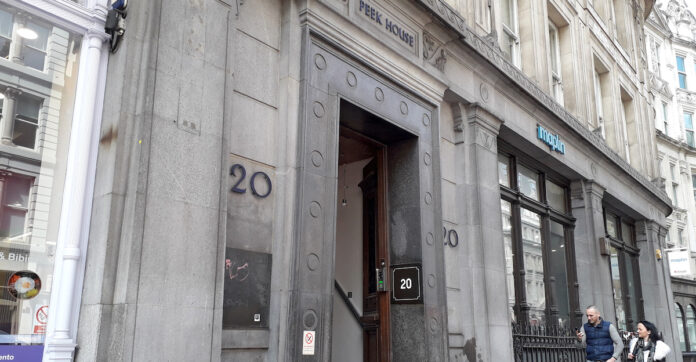 A new live music and cocktail bar called The Rocket looks set to open in the Square Mile after negotiations with police and council officers.

It comes amid a prolonged period of small music venues closing because of rising rents and clashes with new residential buildings.

London lost 35% of its grassroots music venues between 2007 and 2017, according to research by City Hall, which also identified another 23 venues “at risk” of closing.

But after taking over the Peek House office building near Monument station, The Rocket will host bands until 1am throughout the week, and serve alcohol until 2am on Thursday, Friday and Saturday nights.

Howard Taylor of Rocket Leisure Ltd applied to the City of London Corporation for the venue licence, originally asking for permission to host gigs and DJs until 3am, seven days a week; and to serve alcohol until 2.30am.

Letters sent by the City of London Police showed the force was against it hosting “promoted events” after 11pm, meaning only house bands and DJs could play late.

And the Corporation’s environmental health officer Siobhan Marshall had said “live music could be detrimental” to residents living in the area. The licence was agreed shortly before a hearing at the Corporation’s offices on 10 May, when councillors would have been called upon to settle the disagreement.

The company’s website says: “We are a young, exciting company with an unpretentious attitude, managed by a team of people whose ideas and shared beliefs make for a multi-dimensional business.

“Each of us share the passion of providing great drinks, quality live music and tasty pizzas.”