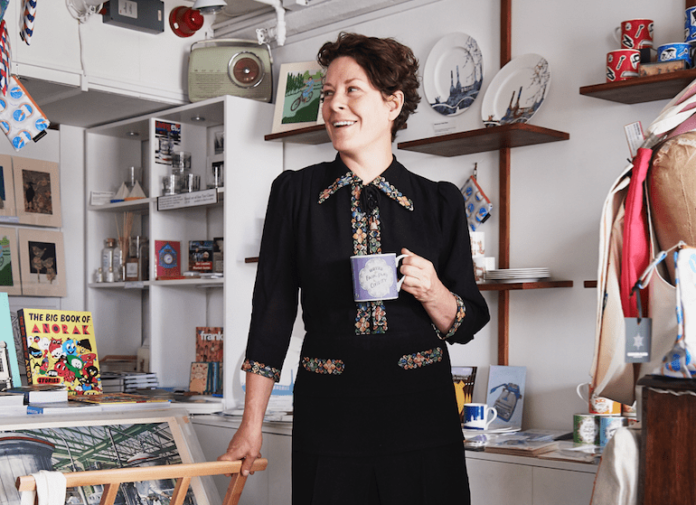 When the famous Oxo Tower was reopened in 1996 as a complex of low-income housing, designer workshops, eateries and community offices, it became one of the first major mixed-use city buildings in Britain.

The Independent lauded the iconic development as one “that defies the laws of planners, bankers, pension fund managers, the majority of property developers and the whole deadly culture of ‘men in suits’.”

Twenty years on and SE1 rents are skyrocketing, retail chains are muscling in, but the building remains resolute in its role as a community hub; thanks in no small part to the makers who have managed to turn levels two and three into a mecca of independent design.

The 30-odd glass-fronted studios ringing the building house all manner of makers from jewellers to ceramicists and Archipelago’s textile designer Doreen Gittens, who has been hand-weaving scarves on a loom in her workshop since the building opened.

Snowden Flood has made her name designing and sourcing high-quality homewares and gifts, most with a nod to British life and all manufactured in the UK. After years working out of her south London home, the decision to move into the complex was a no-brainer. After all, how else does one land an office overlooking the Thames without a job in finance?

The river’s daily milieu of traffic is one attraction – “I’ll often stop mid-sentence with a customer to point out some barge or boat I haven’t seen before” – but Snowden also credits her location with influencing the evolution of her business.

What started as a few cushion covers featuring British landmarks, created as souvenirs for friends in New York, grew into crockery, glassware and lamp shades, but she moved into stationary and prints because they were easier for tourists to carry around town with them.

“So many would be searching for unique, locally-made pieces to take home – that’s not easy to find in central London – and because I know lots of designer makers I began to stock their items too.”

Like most of her creative neighbours, Snowden’s is a small scale operation, but one that Oxo Tower Wharf’s owner Coin Street is determined to make space for in central London. “The ethos for Oxo Tower Wharf was to create a centre for design excellence,” Coin Street’s Louise King says.

“Our small designer-maker studios are available at affordable rents to help to provide a platform to those working in this field. “We are really proud to have helped to create a destination for people interested in design with many unique studios and products available.”

For Snowden, the story behind these products is as important as the aesthetics, which have turned her tiny shop into a riot of colour. Her ceramics, for instance – bright silhouettes of scenes from city life – are created in Stoke-on-Trent by a group of women apprenticed at Wedgewood.

“My ceramics all look quite simple but up to 20 people are involved in the making of each piece; the mixing of inks to the screen printing and decorating. “The girls – they call them ‘the girls’ but they’re all actually really old – have all got such phenomenal skills, it’s really quite amazing to watch them work.

“It’s nice to hear there are still people around who are making things with quite a lot of integrity and I’ll do anything I can to support them.”