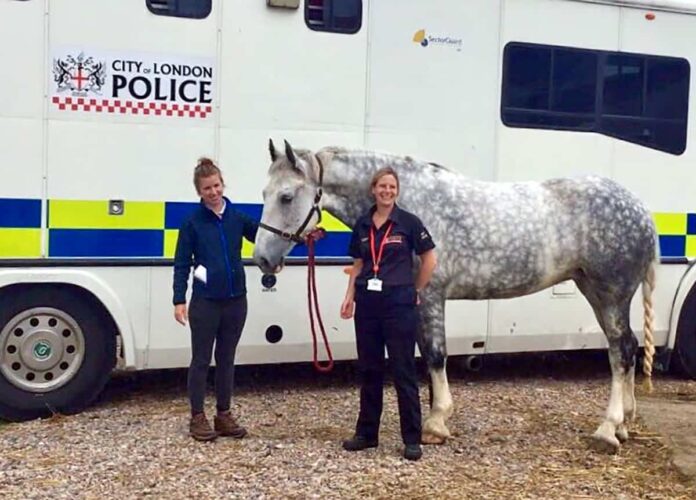 CITY of London Police has welcomed a special new recruit, one which you may soon see trotting around the Square Mile.

Iris is a six-year-old mare from Ireland and is the mounted units’ newest police horse. But it’s not as simple as buying a horse and rolling her out. The City is one of the most challenging sensory environments for a horse, or indeed any animal, including us humans. Iris is about to enter that world for the first time.

The City of London has always had a love affair with horses. The same streets full of suits and bicycles today would have 100 years ago been full of horses, carriages and a fair bit of equine waste. Say what you want about diesel fumes but at least the City smells better today.

The force has a proud tradition of mounted units. They started in 1873, renting horses from the livery stables, and strive to uphold that heritage in today’s hectic metropolis, but it’s not easy.

“The whole City is a task and a half,” says Eloise Mayhead, stables manager for City Police.

“There is so much going on. You can have a train going under it’s feet, the vibrations going through, you can have a double decker bus, somebody with a suitcase rattling, somebody unloading a van, and somebody abseiling down a building cleaning windows – and all of that next to a building site.”

All of this can cause sensory overload for a horse. Most don’t even see a car in their lives, let alone a double decker bus.

Eloise explains what can happen if things go wrong: “A few years ago we had a horse on patrol close to the railway lines below and a train went past. The horse got upset, jumped around and after that day he never settled again on the roads.”

Iris will begin her training away from the City to avoid a catastrophe. Eloise’s training philosophy is to ‘trickle-feed’ the horses. At her stables near Bushy Park, a team of four work with the animals to prepare them for life in the Square Mile.

Iris seems to be doing well. She’s what Eloise calls a “logical” horse. When she sees a threat, instead of bolting, she assesses it first.

“Horses need to stay focused on what they may be frightened of and if they get frightened we need them to take guidance from the rider. Some horses will bolt instinctively and some won’t. You want the horse that won’t.”

If she continues to impress, Iris will be passed over to PC Kim Ashton who will patrol her in the City. Kim hopes it will be sooner rather than later.

“She’ll stay here [Bushy Park] until the spring to get her used to the roads around here. Hopefully then she’ll come to me in the city. Then she’ll start with just weekends only. She’ll do a number of weekends and we’ll keep doing that until she’s taken it in her stride.”

In the City Iris will have a demanding schedule.

“It can take up to 18 months to get a police horse all singing, all dancing,” Kim explains. “They need to handle patrols and public order situations like football matches and political demonstrations. We also build them up to ceremonial events like the Lord Mayor’s Show.”

Once she is ready, Iris will become the most visible presence of the City of London Police and a crucial part of public relations in the Square Mile. “What’s great is the public love us. If I wasn’t on a horse people wouldn’t come and talk to me. It breaks down barriers. The public seem to really like our presence.”

Spending so much time with the horses has had an impact on Kim too. Her last horse, Beau, left her after 18 months. “We had such a bond,” she says.

“It’s hard to hand Beau over. But it’s also very rewarding to see my horses go on and do the job for someone else.

“She just went to Buckingham Palace and led the Royal Marine Band and I was very proud.”

For now, Kim is encouraged by what she’s seen from Iris. Herself and Eloise will continue to work with her until she grows into a horse fit for the City.

“I’ve got a gut feeling Iris will be good,” says Kim. “No reactions to tractors or lorries; we’ve even seen a load of deer in Bushy Park this week and still no reaction. She’s naturally brave.”

Keep an eye out for Iris in the spring as she completes her journey to become the force’s newest elite horse. Chances are she’ll canter past on your lunch break, so don’t be afraid to come up and say hello.