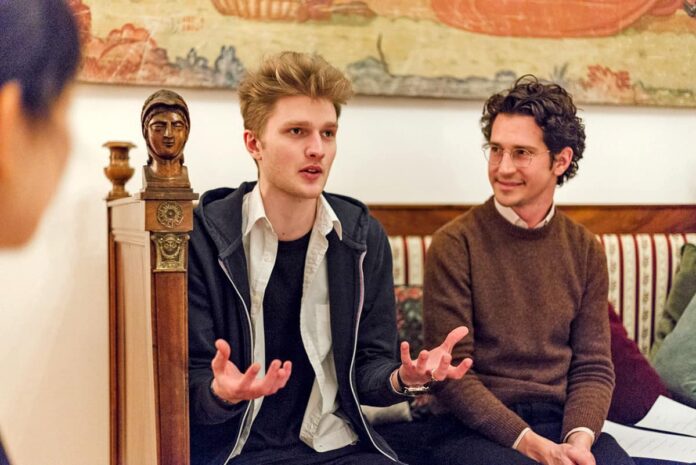 Is living the Good Life a fixed state or a process?” “How do you know when you have reached it?” It’s around 8pm on a chilly Wednesday evening in Spitalfields and a group of strangers are on their third existential question and sixth bottle of red.

A young woman seated on the floor starts drawing comparisons between her sister’s profession (making prosthetic limbs for children) with her own (writer), while a man at the back of the room recounts the story of an elderly widower who used her husband’s death as a reason to start learning languages and practicing martial arts.

It’s the type of deep and earnest conversation that you could imagine having in a theology tutorial at university, or sprawled on beer-stained carpets with slurring somebodies at the end of a house party.

Instead, we are all middle class professionals of varying ages gathered in the living room of a smartly renovated Georgian off Brick Lane. Some are travellers lodging in the rooms upstairs, others live or work in the area and have simply come to be part of the discussion.

This is Norn, an international members club aiming to revitalise what it calls “the lost art” of face-to-face conversation from within its portfolio of four large residential properties in urban centres around the world.

Launched in April, the four townhouses, in London, Berlin, Barcelona and San Francisco, are intended to facilitate an offline social network for travellers and locals to connect through a programme of salons and social gatherings.

For a monthly fee of US $2,000 (£1,400), residential members can book in to stay at any of the Norn houses for between one and six months, and participate in a weekly calendar of events designed to coax out curious minds. Numbers are kept low – there are five bedrooms in the London house – and fees are all inclusive with the exception of meals outside the group dinners.

There is also the option of a local membership that offers access to one event per month in any city for an annual fee of £360. Norn was founded by management consultant Travis Hollingsworth, who, having spent eight years living out of a suitcase, came up with the idea for a social accommodation platform geared towards transient professionals.

What started as a portfolio of homely residences in trendy areas has evolved into a programme of content to stimulate interaction and conversation, based off some of Travis’ learnings from the popular Interpersonal Dynamics course at Stanford Business School.

“It kind of went from being a semi-hospitality product like Soho House, which is restaurants and hotels and bars and gyms, to being more a social product,” Norn’s London house manager Nathan Tregarvan explains.

“You could draw a comparison with an offline social network, because the Internet has opened doors to finding like-minded people from all walks of life but we all know you can get so much more from having these conversations in person.”

Norn events are modelled on salons held by an emerging class of intelligentsia during the French Enlightenment, and are a product of months of experimentation with strategies to get people connecting on a deeper level.

“At first I was thinking we could just get people in a room and let them get on with it, but that didn’t achieve very strong outcomes, people didn’t have a reason to come together – and without that it can be really hard to transcend small talk and get to know each other.

“We’ve found that conversation dinner format and the salon are the most natural, easy ways to enable people to find out about others; what’s going on in their world, what their history is, what their ideas are, and that’s how you have a more expansive life.”

Norn is entering the market midway through a global resurgence in club culture across major cities.

From The Ned’s 10 restaurants and five-star hotel, to Shoreditch House’s scene-stealing rooftop pool and the Devonshire Club’s business lounge and brasserie, private members clubs are no longer the domain of the tweed blazer-wearing, cigar-smoking, privileged elite (though the sizeable fees require members to have some depth to their pockets).

Instead they have become places for the career-driven and mobile to network, collaborate, or simply put down roots for an afternoon, a week, and in the case of Norn, a month or longer. Take up has been strong, with 64 residential memberships already snapped up since last month’s launch.

“We’re talking about a mostly single, highly transient, skilled class of people, and although that creates a very fulfilling life because you’re travelling and exploring the world, you don’t necessarily have the same sense of belonging or a community around you where you can ask these types of questions,” he says.

Of course, not everybody wakes up in the morning ready to ponder notions of success and failure, national borders and mythology, a fact than Nathan, despite his philosophy degree, is keenly aware of and ready to counter.

“We’re trying to get around that by framing what are quite philosophical topics in such a way that people respond to them quite personally, which anybody can do.”

He’s right; my preconceptions of an overly sincere session of ‘solving the world’s problems’ from inside an expensive house are quickly replaced by the swapping of stories, sharing of views, and one of the most interesting conversations I’ve had in quite some time.

“The whole idea can sound quite worthy, but I think generally this generation are more inquisitive about people in different places,” Nathan says.

“We also still crave those in-person connections, despite the growth of online – maybe we should be asking why?”

But one question at a time.