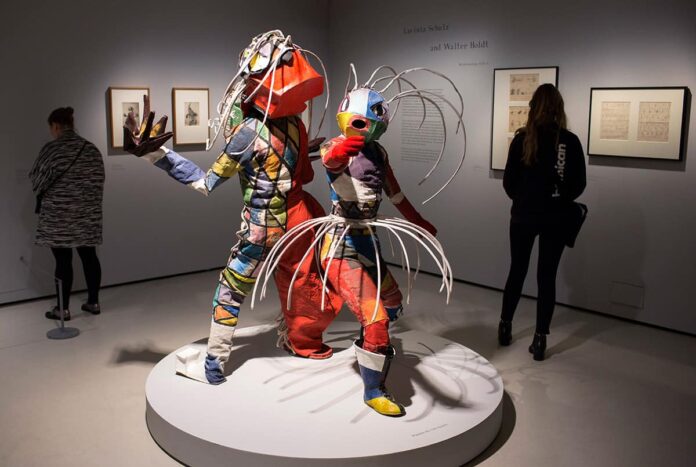 Artist and muse. It has been considered the most important relationship of the art world for thousands of years.

And while there are plenty of artists, and even more muses, in the Barbican’s study of creative power couples, the exhibition makes a valiant effort to look beyond traditional relationship dynamics to discover the driving forces behind one of the most non-traditional eras in modern art.

Modern Couples: Art, Intimacy and the Avant-garde is a journey through the personal and professional relationships of more than 40 couples active in the art world during the first half of the 21st century.

Legendary lovers such as Frida Kahlo and Diego Rivera feature alongside duos with no more than a fleeting dalliance, like Vanessa Bell and Roger Fry.

Sometimes, it is unclear whether the pairings were romantically involved at all, as in the case of architects Jean Badovici and Eileen Gray. Most of the time, however, it’s fairly explicit, as with the partnership between Marcel Duchamp and Maria Martins, which bore multiple sculptures of the latter’s perineum and anus, which he used as an object to fondle after she left him.

With so many relationships to unpack across some 25 rooms, the works themselves often take a backseat to juicy stories of love, desire, sexual liberation, radicalism and, of course, heartbreak outlined in the exhibition summaries as well as the poetry, love letters, gifts and archive material.

It is clear the curators have presented their analysis of the couples through a post-#MeToo lense, challenging the perception that modern art was the product of male geniuses, and framing females as driving forces of the movement.

This line of thinking works in some pairings. For instance, we learn of Emilie Flöge, the successful fashion designer and partner of Austrian painter Gustav Klimt, who drew inspiration from his work to develop the patchwork quality of her textiles. Then there is Filippo Tommaso Marinetti, founder of the Futurist movement, whose partner, Italian artist Benedetta Cappa, refused to subscribe to his contempt for women, instead collaborating with him on the softer, more spiritual movement known as Tactilism.

The couples make their presence felt on a political scale, of course, most notably in the case of Henry Crowder and Nancy Cunard.

He was a black jazz musician, she a wealthy heiress spurned into political activism by his experiences of racism. Nancy went on to found the influential Hours Press in the 1920s, and was the first to publish Samuel Beckett’s work.

In others, however, this narrative is a bit of a stretch; particularly in the study of Dora Maar and Picasso where an attempt to paint the photographer as a collaborator with the painter, who was notorious for using women as objects, falls a little flat.

Homosexual relationships of the era are given their due, with a room dedicated to poet Natalie Clifford Barney’s salons for the lesbian community of Paris’ left bank, as well as the works of her lover, American painter Romaine Brooks.

Photographer George Platt Lynes provides images of himself with couple Glenway Wescott and Monroe Wheeler showcasing graphic homoeroticism in the desert, as well as what happens when three becomes a crowd.

And any question over the nature of the relationship between Federico Garcia Lorca and Salvador Dalí is answered in a series of intimate letters between the Spanish artists.

The exhibition was always going to be a massive undertaking and some duos and trios are better served than others, but one key takeaway from Modern Couples is that when it comes to relationships between creatives, artist and muse doesn’t even begin to cover it.

Modern Couples: Art, Intimacy and the Avant-garde is on at the Barbican until 27 January.