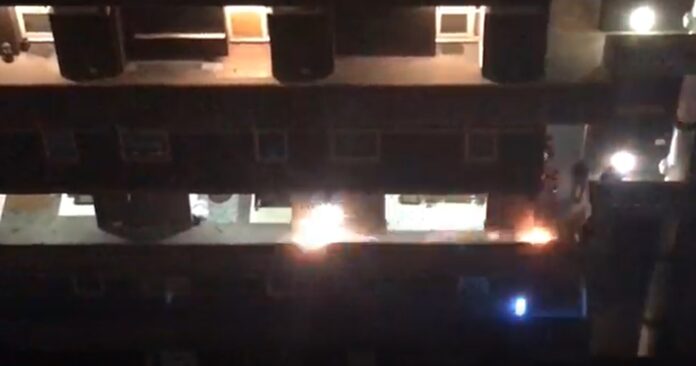 A Middlesex Street resident is calling for a ban on the sale of fireworks to the public after a group of teenagers were involved in a ‘fireworks duel’ on his estate.

Common Councillor Jason Pritchard caught the reckless stunt on camera, and is calling for a change to the law to stop the explosives being used in such a dangerous manner.

The footage shows youngsters firing a rocket down the outside communal walkway, with sparks filling the corridor as it exploded.

He suggested limiting the sale of fireworks to licensed premises only.

“The reason I released the video (below) is to show the danger of selling fireworks to the public. My main priority as an elected member is the safety and security of my constituents in Portsoken.”

The incident took place on Bonfire Night, with Mr Pritchard alerted to the incident via the local Neighbourhood Watch WhatsApp group.

“I immediately went to my balcony and called the local police station and described what was going on over the phone to the operator.

“Within about 10-15 minutes the police had arrived with the local Park Guard and we went up together to the location to speak to the teenagers involved.

“The police were obviously fairly occupied on fireworks night with various incidents so there were no arrests but they simply gave the group a warning.”

Mr Pritchard wants to see the temptation of using what are supposed to be celebratory explosives in a grossly irresponsible way eliminated.

“It was quite scary for residents in their flats who could hear this reckless and dangerous behaviour going on.

“The group were firing fireworks horizontally across the main square, which was obviously very dangerous, and along the balconies.

The incident did, however, underline the importance of the Neighbourhood Watch scheme that Mr Pritchard and fellow residents have introduced in recent weeks.

“After [the police arrived] the incidents stopped completely, and this was largely a success for our new Middlesex Street Estate Neighbourhood Watch group. The improved communications helped tackle the problem quickly.”