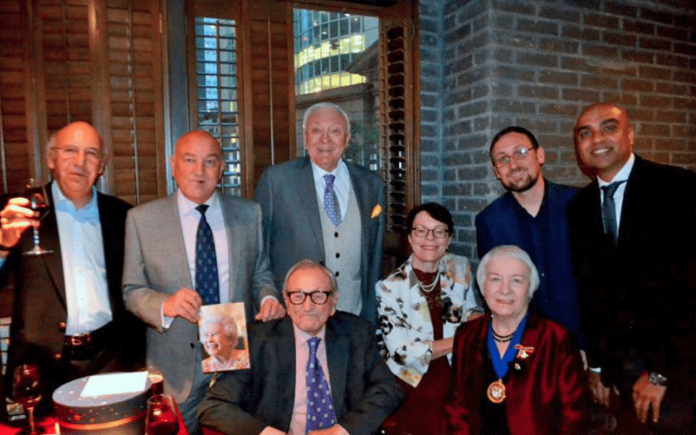 IT was a case of Mannie, Mannie happy returns for one Middlesex Street resident who brought in his 100th birthday in style last week with well wishes from his sporting and political heroes.

Mannie Blankett turned 100 on 18 October, celebrating with parties all over Portsoken, starting with a lavish affair at the Dorsett City Hotel in Aldgate, followed by an afternoon of singing and dancing with his friends at community centre Toynbee Hall.

The youngest of six children to Polish immigrants, Mannie was born and raised in the East End, and trained to be a hairdresser before going into the family’s furrier business in the West End and spending several summers as a lifeguard for lidos around London.

Speaking with Spitalfields Life last year Mannie said that after a stint in the armed forces during World War II and then the Peace Movement in the 1960s, he returned to the East End and has been living in Petticoat Lane for the last 20 years.

The birthday boy was delighted to receive his customary card from the Queen, as well as surprise well wishes from Tottenham Hotspur coach Mauricio Pochettino and a personal address from Jeremy Corbyn.

Portsoken councillor Jason Pritchard presented a video message from the Labour leader during the party at Toynbee Hall, which Mannie attends three times a week for activities and social events. It was a packed house for the community centre’s first 100th birthday party, with around 30 regulars turning up to congratulate Mannie on the milestone and indulge in one of the centre’s most popular activities; a group singalong.

The man of the hour was in high spirits despite a late night celebrating with City dignitaries, local councillors and Lord Mayor Dr Andrew Parmley.

Portsoken councillor John Fletcher said: “Seeing Mannie surrounded by family, special friends and City dignitaries symbolised for me the unique way the community of the ward of Portsoken and the City come together to celebrate each other’s achievements…..and what an achievement.

“We are all immensely proud to have Mannie amongst us, still making his way round under his own steam, with time for everyone.”