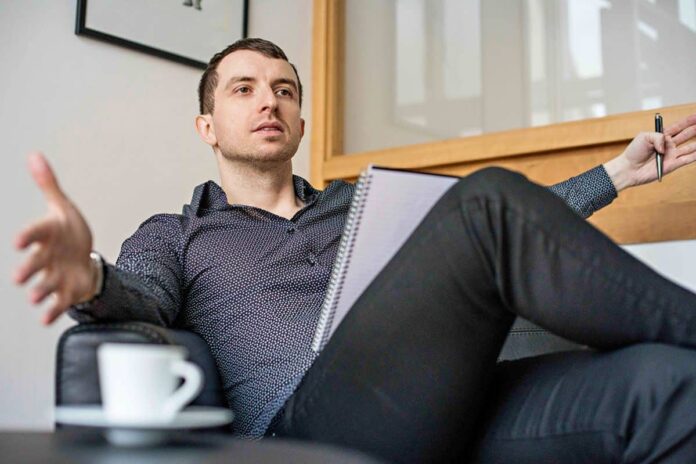 Life coach Michael Serwa has built his career around giving some of London’s most powerful people a stern talking to – and getting paid handsomely for the privilege.

He has ordered top City traders to kick their cocaine habits, leading lawyers to quit their jobs, and high-powered CEOs to end their relationships, often with a few expletives thrown in for emphasis. And 99% of the time they do as they are told.

“These are smart people, most of the time they know what they need to do,” Michael explains. “They just need that push to act on it.”

In Michael’s case, it can be more like a shove, but it’s this tough love that has established him as one of the UK’s most sought after life coaches and one of the highest paid, raking in up to £500,000 per year.

So why does this approach appeal to the City executives that make up a significant proportion of the 300-odd clients Michael has helped over the last six years?

“The kinds of people I work with are very senior in their careers and they don’t have many people in their lives that challenge them,” he says.

“You can imagine everybody at work kissing up to them, telling them what they want to hear, and then at home their partner might not challenge them because they are financially dependent.

“But these types of people want to be challenged, because they know that’s how they grow.”

Life coaching emerged in the United States about 20 years ago, and can vary from incorporating elements of therapy or counselling (though life coaches do not need to qualify as either) to serving as what some might call a sounding board or good friend. The field is largely unregulated, and therefore open to interpretation.

Michael likens his own approach to that of a personal trainer, rather than a therapist:

“Just like no serious athlete would ever consider not having a coach or trainer, any person who is serious about excelling in life and being a success should have a life coach.”

Michael sees clients fortnightly for an average of three months, conducting sessions from a sofa in his Mayfair apartment. Each new programme begins with a comprehensive consultation and analysis whereby clients score 25 different areas of their life ranging from career through to social life, relationships and health.

At the end of it all, Michael asks them to rate their happiness out of 10, a figure that usually works out to be roughly the same as the average of all 25 individual scores.

“Clients don’t email me saying, ‘Hi, my name is John and I would like to be more happy’, but that’s ultimately what everybody wants,” Michael explains.

“This process just helps figure out the actions you need to take to improve that score.”

The problems are as varied as the individuals on his couch, but common issues that crop up among his City clientele are those relating to substance abuse and work/life balance.

He begins outlining a recent case of a senior trader: “highly successful, very sharp, mid-40s with a wife and two kids… but his lifestyle was sh*t – drinking and [cocaine].”

“He would have a heavy night on Thursday and still be feeling it the following Tuesday…these guys aren’t necessarily addicts but they’re also not 18 anymore.

“You have to ask, ‘How has this had a knock on effect in other areas of your life?’ ‘How does this affect your partner?’ – in those cases you need a fundamental lifestyle change.”

However, Michael says the most widespread problem among City clients is a general lack of fulfilment.

“They might have a great job, lots of recognition and respect, big house, happy family, on paper they have everything,” he explains.

“They know they should be happy – on a rational level – having worked for all these things, but they might have gotten to a point where there’s nothing new happening and they feel unhappy or unfulfilled.”

In those cases, Michael says it’s about looking for things in life that can get the juices flowing again, like a new business venture, hobby or even something as simple as volunteer work.

“When you focus on helping other people, it makes you feel good… you get a kick from it,” he says.

“It always works, the scores always go up, it’s just a matter of finding what works.”
While a few afternoons planting trees might be a small adjustment with big rewards, others find they need to take a more significant leap to create change.

Michael recalls another client, a top lawyer who was deeply unhappy at work and desperately wanted to be in a relationship.

At his urging, she quit her job to follow her dream of working in the non-profit sector, by which point she had met her future husband; a former colleague who asked her out after she resigned.

“I went to their wedding and she grabbed me and introduced me to her mum and said ‘Mum, this is Michael, the reason we’re here today’,” he says.

“It’s in those sorts of cases when you realise the changes you can make are so profound.”
However one change that remains a work in progress is the stigma that remains attached to life coaching in the UK.

Michael says that while Americans treat life coaches as a tool for growth, akin to having a personal trainer, Brits tend to view it as something to be ashamed of.

“We need to bring coaching to a level where people think of it as a strength, not a
weakness.

“It’s not for losers – look at some of my clients, these are some of the most successful people in the Square Mile.” 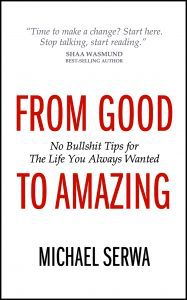 From Good to Amazing: No Bullshit Tips for a Life You Always Wanted is available on Amazon from £7.50
michaelserwa.com