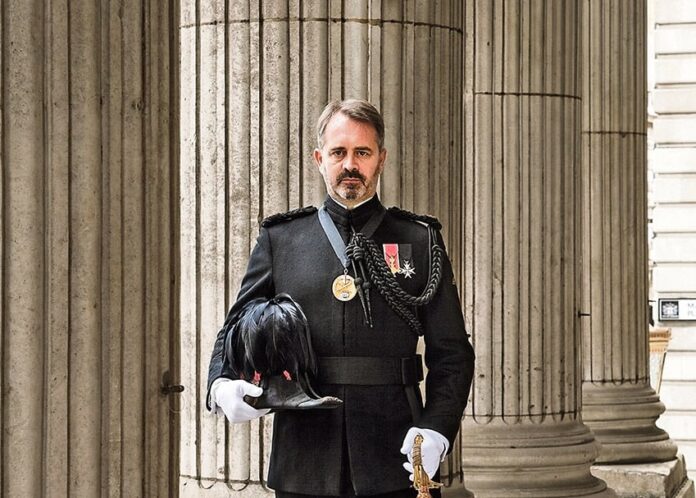 Dominic Reid is an extremely busy man at this time of year, and his role as pageantmaster for the greatest unrehearsed show on earth has taken on an extra degree of difficulty this year following an untimely injury.

“I’ve taken a hamstring off!” he told City Matters ahead of one of the biggest days in the Square Mile calendar.

“A friend invited me to try waterskiing, and rather than gliding across the water like an Adonis there was a loud ‘pop’ and my hamstring detached. I’ve had an operation but I will have recovered in time for the show.”

Despite being forced to “limp around” for the past six weeks, Dominic hasn’t broken stride. In fact, his physical limitations while conducting this year’s edition of the show are still far from his greatest challenge.

“The show is a complex creation with many different moving parts, and that is a challenge in itself to make sure everything co-ordinates to create something that is compelling, watchable, and fun for everybody,” he said.

“Between military units, carriages and camels there is some wonderful content and the challenge is to bring them together in a way that joins them up seamlessly. It’s great fun dealing with all sorts of interesting people.”

2017 will mark Dominic’s 26th year manipulating ideas into physical, viewable form, and throughout his long affiliation with the 800-year-old parade he has witnessed a great number of changes; some good, others saddening.

“It will not be a surprise to anybody when I say that the counter terrorism environment is more challenging than it used to be,” he said.

“And I can say that a great deal of thought and hard work is put in to mitigate [any threat] and take sensible steps towards a safe, happy and enjoyable day.” Charles Bowman is the latest star of the show, but even with his name plastered all over the day’s scheduling, just how much of an influence does the new Lord Mayor have on his own introduction to the Square Mile?

“This is his show. When I first started I was working for an individual to deliver a show and how he wanted to be seen. It is more of a corporate, collaborative effort now but the show will still reflect his interests and past, the companies he has worked for and the charities he has supported. It’s very personal.

“There is a lot Charles has requested. He is very keen that the RAF should form a guard of honour. His father was a career RAF officer of great note and this year also marks the beginning of the RAF’s centenary.

“He is also a Worshipful Company of Grocers liveryman and they have magnificently got four camels ready for the show.

“What is fantastic is that the Lady Mayoress will this year be riding on horseback, so I wish her every bit of good luck! It is the first time that has happened since 1984 – so it’s great. It is all set to be a really good day.”

And if Dominic himself could have one request on 11 November?

“What I would love is for it to be dry! It has been wet too often in recent years.”

Two parties on the go at once

Party planning can be a time-consuming endeavour, so spare a thought for the man who is constantly managing two at once!

“Planning for 2018 has started already because getting all that content together requires some real thought,” said Dominic when quizzed on when exactly he gets a chance to reflect on a job well done.

“If you want someone to see what being in the show is like you have to do that in advance of the next show.”

Dominic puts the seamless running of the behind-the-scenes work down to the expertise of those involved, even though his team in particular is smaller than most would assume.

“There is a big, disperse group of stakeholders, many of whom have been involved in the show for years and understand it well, such as the BBC, the Corporation, City Police, the military, London Ambulance Service and so on, but my team is three full-timers. Most of the time it is just two of us but it works well and we don’t lose track of what needs doing.

“There is a system, a very clear methodology. Because I have been on crutches I haven’t been taking notes. And because of that I’ve realised that I don’t have to, it’s all in my head.

“Not because of fantastic memory, what I’ve got is really good context; a framework of what it should look like.

“I can plan how the show will manifest geographically and know how to make calculations in my head. I know what the BBC wants to do and which lots of the procession to bring forward. Because of the solid concrete structure you can make demands and fiddle with it.”

But being all knowing is only half the battle. Dominic says that it is his desire to put on a great show that keeps him enthusiastic for the task at hand, all these years on.

“It’s a question I’ve been asked before, including right back when I first started. The show is a fascinating puzzle with, as I’ve eluded to, extraordinary people.

“Honestly I think the show is a force for good. Interview anyone of 7,000 people to appear in the parade and every single one has a story worth telling.”

IT would be easy to think every instalment of the Lord Mayor’s Show is the same – three miles of floats, a golden carriage, and fireworks to cap the day.

But those who subscribe to that mode of thought would be sadly mistaken.

“7,000 people make up the procession,” explained Dominic. “Some people may have done it before but the vast majority never have, so it is a completely new cast, new crowd every year.

“While the form is instantly recognisable, and the size and shape is very similar, each show is actually completely different. Different people doing different things help keep it alive.”

Each parade does feed into the next, however, and Dominic’s team make a concerted effort to speak to all stakeholders to identify areas for improvement on an annual basis.

“There is a detailed wash-up and debrief for a number of areas; how it has gone, what it looked like. There is feedback from all agencies involved; who took part and what they did.

“That affects the mechanism used to put the show on. We are working now for the 2018 show and trying to gather new interest and fresh organisations. That work continues all the time.”

A glass or two to settle the nerves

Even after more than a quarter of a century in the job Dominic admits to pre-parade nerves.

So how does the man behind the world’s largest unrehearsed show quell any jitters ahead of the big day?

“I usually have a glass of something the night before, on the odd occasion I’ve overdone it and not helped anybody!”

But does the ritual end there? Or are there any secret superstitions that the master of detail and precision leans on to help ensure the festivities go to plan.

“I wear a uniform, parts of which were my fathers and that has a great deal of meaning for me,” he said.

“My only other superstition is that I measure some things in feet and inches and certain things in metres, but I won’t go into detail!”