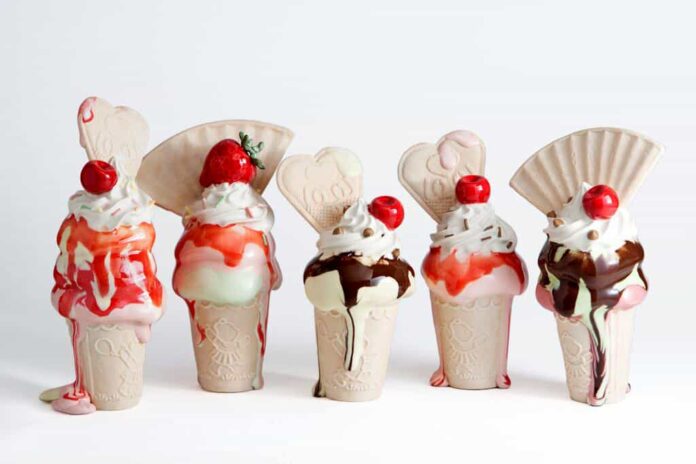 Where is one likely to find ornate printed silk scarves, hand-crafted violins, and ceramic ice cream cones lifelike enough to lick in the same postcode, let alone under one roof?

Why, Clerkenwell of course.

For centuries, this enclave of leafy streets and historic warehouses just north of the City has held on to its heritage as a hub of creativity, with designer maker charity Craft Central at its heart.

For more than four decades, Craft Central has worked to support its network of designer-makers by providing affordable studio space at its Clerkenwell Green headquarters, practical business help, and open studio events like the popular Made In Clerkenwell, which returns this weekend.

But, as with the clockmakers, bookbinders and screenprinters before them, Craft Central is moving on to more affordable pastures, announcing a move to the Grade II-listed Forge building in Canary Wharf later this year.

It will bring an end to the current format of their most popular open studios event, which, for more than 15 years, has offered makers direct access to their buyers and the public a backstage pass to where the magic happens.

The four-day event sees in-house designer-makers throw open their doors, plus a selection of the 650-strong membership set up in the gallery spaces to showcase their ranges of home accessories, fashion, jewellery, ceramics, stationery and prints.

“Most good designer-makers can talk with great passion about what they do, and having the tools of the trade around offers them an opportunity to really engage
with the public.”

So, given the importance of the open studio events to Craft Central’s overall aims, what of the future for Made in Clerkenwell once things are no longer ‘made in Clerkenwell’? Sue says that while we shouldn’t expect a carbon copy ‘Made in Canary Wharf’, the organisation will maintain a strong connection with London’s craft tradition in their new home.

“We’re going into an area where all the ships were built, and there’s still a strong craft tradition, so it’s actually more of a ‘makers’ area than Clerkenwell, which is really moving more into design,” she says.

Until then, it’s time for Craft Central to farewell the area that helped make the organisation it is today. Here are some of the highlights:

One of Craft Central’s newer residents, Anna Barlow will present her fabulous ceramic ice creams sculptures in her studio in St John’s Square. Each sculpture is expertly glazed to the point they all look good enough to eat. Barlow’s collections have been presented in galleries across the world, here is your opportunity to see where they are made.

Taught by master craftsmen from across Europe, Ruschil & Bailly have set up home at Crafts Central as London’s only violin and bow making studio. Although new to the scene, they already work with The Royal Academy of Music, The Royal College of Music, and Barbican’s very own Guildhall School of Music and Drama.

Gina Pipét creates silk scarfs for design conscious women. After leaving Liberty and All Saints as an in-house designer for six years, Pipét solely focuses on developing her collection and retails through museums such as the Fashion & Textiles museum in Bermondsey Street.

One of London’s most prized goldsmiths and longstanding Craft Central resident Mark Nuell combines silver and gold with hand-selected gems such as sapphires, diamonds and tourmalines.

Glassware designer Michèle Oberdieck has recently turned her attention to textiles, designing contemporary bespoke screen-printed fabrics and innovative fused glass and textile panels for interior and exterior spaces. The 2016 Craft Central Talent prize winner will showcase a range of glass vessels that were presented at the RCA last summer.

Made in Clerkenwell is on at Craft Central, 33-35 St John’s Square EC1M 4DS, and
21 Clerkenwell Green EC1R 0DX, from 11 to 14 May. For full details visit
craftcentral.org.uk/micspring2017