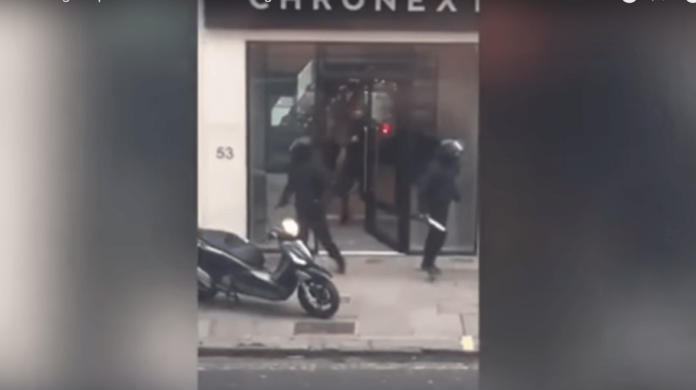 A gang that robbed a Fleet Street watch shop armed with swords and machetes is still on the run after making off with thousands of pounds worth of merchandise in a smash-and-grab raid on Monday.

Police are still looking for the gang after they used a moped to smash through the glass frontage of the Chronext shop just before 11am and brazenly snatch bundles of watches in front of terrified staff.

Footage shot from across the street and posted on Twitter shows one of the burglars patrolling the street on a moped, while two others stand guard armed with knives and a sword.

A witness told the Evening Standard he saw other members inside the store “smashing the cabinets and grabbing loads of watches and stuffing them into bags.”

“One guy came out of another shop as if to confront them but the bloke with the machete threatened him and he backed off.

“They all jumped on their scooters and punched the air with their fists in a victory punch before driving off towards the Law Courts. It was seriously organised.”

A police statement confirmed that nobody was injured, and there have been no arrests at this stage. Detective Inspector Sam Toprak, from the City’s major crime team, said: “We are treating this incident extremely seriously, as we do all incidents of this nature, and we are liaising closely with our colleagues at the Metropolitan Police in order to identify those responsible.”

Police in London are battling a wave of moped thefts, with more than 19,385 moped-enabled offences committed across the Capital in the 12 months to September.

The spike prompted Mayor Sadiq Khan to push for a more collaborative approach between police, Transport for London, local authorities and motorcycle users to address the issue.

He said: “Moped crime is reckless, frightening and completely unacceptable. It will not be tolerated on our streets and it is essential that we all work together to do everything possible to stamp it out.