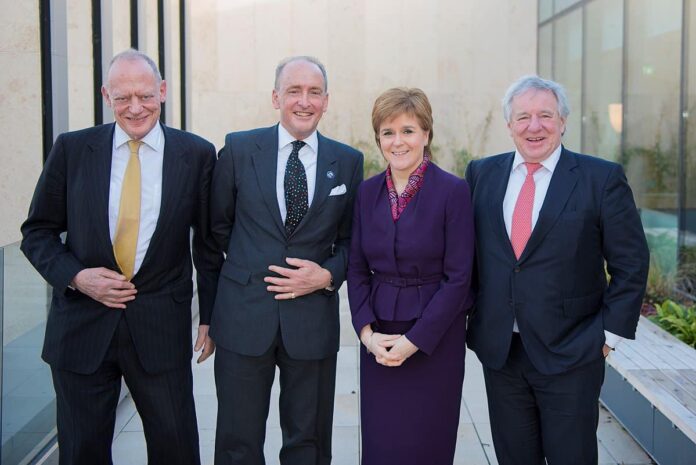 Charles Bowman concluded a three-day trip to see the neighbours on Wednesday, checking in with Scottish leader Nicola Sturgeon to talk about strengthening financial ties across the border.

A second Scottish independence referendum has long been talked about, even after 55% of the country voted to remain part of the UK in 2014.

And the debate took on added significance in 2016 when Britain called for an exit from the EU, which makes the Lord Mayor’s trip north to Edinburgh and Glasgow earlier this week all the more significant.

Top of the agenda was the launch of Mr Bowman’s ‘Business of Trust’ philosophy, a manifesto-like pledge to help rebuild the public’s diminished view of major firms.

He met with the Lords Provost of Edinburgh and Glasgow, various members of the banking, investment management, insurance, legal and professional services communities, and business and trade associations representing the broader Scottish economy.

Following yesterday’s roundtable, I had a private meeting with @NicolaSturgeon – a productive dialogue focused around greater collaboration and our Business of Trust programme. pic.twitter.com/2iPoKd9mdi

Scotland’s financial services clout is not lost on the City.

They generate around £8billion for the Scottish economy – more than 8% of the country’s onshore economic activity.

A recent report by the City of London Corporation also found that Scotland employed the largest number of financial services workers after London, accounting for 14% of the UK’s entire workforce.

“Scotland has a distinguished history in financial and professional services,” said Mr Bowman ahead of his visit.

“It truly is one of Europe’s leading financial centres and the second financial hub in the UK.

“My visit to Edinburgh and Glasgow provides an opportunity for me to learn more about the strengths of this key sector in Scotland, which I will be promoting during my intensive programme of international visits in the year ahead.

“I will also discuss the challenges and opportunities that the entire sector faces as the UK prepares to leave the EU.”

While the Brexit landscape presents many obstacles for people and leaders on both sides of the border, Mr Bowman is calling for unity across the financial services sector to secure a favourable outcome for all.

“Now, more than ever, it is essential that the whole of the UK’s financial and professional services sector works together to protect and strengthen its global position.

“I look forward to speaking to government and business leaders in Scotland about how we can work together and create the jobs and economic growth we all want to see.”