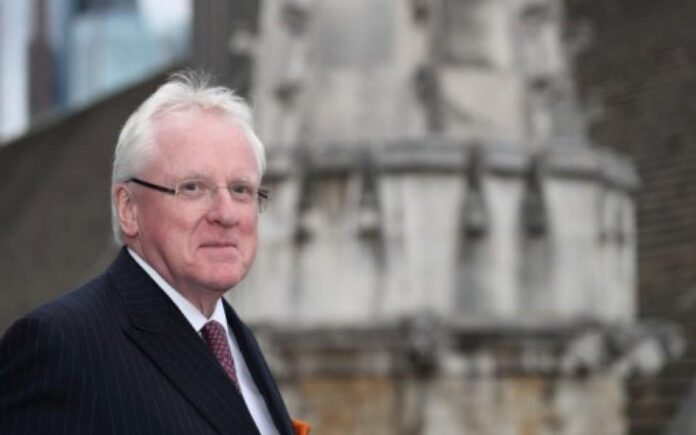 Dr Andrew Parmley’s spell as the City’s main man has been dominated by a decision that took place before he even took charge.

But despite the demands heaped upon the Square Mile and indeed the Lord Mayor himself by Brexit, the musically-orientated educator has revelled in his role as the City’s chief ambassador.

As a matter of fact, Dr Parmley insists that his to-do list would likely be just as long had Britain cast its ballot to remain in Europe.

“I don’t think the Brexit decision has made a huge difference to the amount of work we do, but it’s certainly made an impact on our messaging,” he explained, describing the conversation as inescapable, wherever in the world he may be.

“You can’t avoid it, and wherever I go it is the first topic of conversation, even miles away from home in a country that is not going to be directly affected.”

He says the reaction varies from time-zone to time-zone, but with his final days in office on the horizon Dr Parmley made it crystal clear how, in his view, Britain should pursue its renewed relations with the continent, and indeed the world.

“In China they are incredulous, whereas in the Gulf they are not remotely interested (in Brexit), in fact quite the opposite is true. They ask me why they do not have more opportunity to invest in the UK.

“The future for Britain is a continued access to the single market, which for me is a no brainer for both sides of the debate. London needs Europe and Europe needs London, we are the premiere financial centre in the world. But then we also need to sort out a transition period as soon as possible.”

Steering clear of the political motives behind ongoing discussions, the Lord Mayor vented his frustrations about the lack of clarity ahead of the biggest economic shake-up in a generation.

“There has been a lot of heeling dragging. The longer you take to decide what a transition looks like the more time you buy before you have to push the button.

“Yes, that can mean more time for reflection but a decision needs to be made.

“We will all need time to adjust to the new practices and that’s not going to happen in the next two years, or even the two years after.”

But if not for the City itself and the preservation of its world-leading financial centre status, Dr Parmley wants a swift resolution for the people who make the Square Mile, and the rest of the nation, tick.

“People are the most important aspect in all of this for me, 270 nationalities in the Square Mile, with 300 languages – it is a huge melting pot for people of the world, not just Europe.

“I’m not a financial services person, which sets me apart from most of my predecessors, but I’ve really grown to understand the significance of the sector and what it does to maintain stability for the country.

“And what I’ve also learned is what is being done from the Square Mile to provide liquidity and expertise around the globe.

“My admiration for the 450,000 who work in the City has gone up immensely in the last year.”

The outgoing Lord Mayor also says he loves Mansion House but will not miss living in one of the City’s most iconic addresses.

In fact, Dr Parmley says he takes comfort in the fact he is being succeeded by his old friend Charles Bowman, and is buoyed simply by the fact he has played his part in a centuries-old tradition.

In reflective mood, he told City Matters that “there is always the next Lord Mayor coming” and that being part of the bigger picture is satisfaction enough as his time in the spotlight draws to a close.

“Its a catch 22,” he explained. “You spend such a great deal of time preparing for it, discussing the role with the media, discussing how to deliver a speech, planning overseas trips and getting the messaging right, signing 5,000 Christmas cards… that you are consumed by the preparation for a good two years before you even arrive here.

“That’s interesting in itself because we are only elected six weeks before taking office and soon enough Charles Bowman will be sitting here. I think it’s so full on that there is little to no time to reflect during the year.

“As a result, I think we charge towards the finishing line in the knowledge that the job has, hopefully, been done well, but also knowing that great people are going to follow me.”

And it is that trust in the succession process that Dr Parmley highlighted as he passed on his behind-the-scenes assessment of his 12-month term.

Unbeknownst to most, Lord Mayors actually undergo an all-encompassing passing of the baton. “In the spirit of what we call ‘the continuum’ we are now encouraging the people we think will be Lord Mayor in the next three years to work very closely together.

“This is a bit of a new idea, but rather than a pop-up mayoral team with a pop-up charity and then all gone, the concept will develop legs.

“This is good in all sorts of ways, not least in terms of overseas visits. Sheriffs travel with me on these trips and what we are trying to do is suggest that they go back to countries they have visited when and if they eventually become the Lord Mayor.

“This is so that they have a relationship with the people they meet, but also they can follow up if something has been promised.

“The next Lord Mayor into the country can say ‘We’ve done what we said we would do, have you done what you said you would do?’ Let’s have some accountability, let’s try and find some deliverables.

“The continuum is a great force for good and in that respect I think I can leave Mansion House not sorry to leave, but actually rather pleased to leave because it’s time for someone else to have a go.

“I’m number 689, there is always the next one coming. It’s beautiful and I love it, it’s a bit ludicrous, but I won’t miss it when I am gone.”