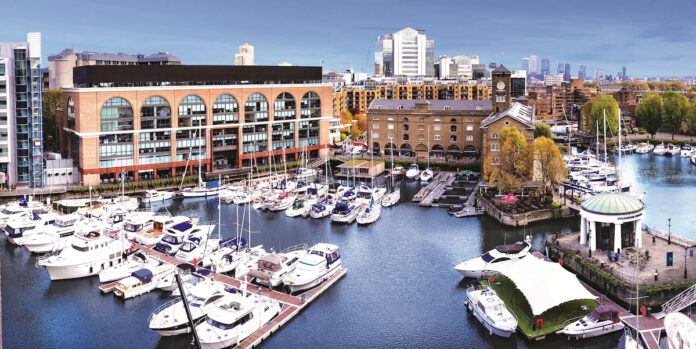 We don’t know why Wapping wasn’t on our radar sooner. It’s located right on the cusp of the Square Mile and East London, is home to a whole host of stunning waterside properties and dining destinations all the while boasting some of the Capital’s best transport links. That’s ticks all round people.

And, unlike the rest of East London, Wapping isn’t full of new high-rise developments constantly redrawing the map. Fortunately, regeneration came early here. In the Eighties, many warehouses were restored and made into riverside lofts, retaining their interior character and that of the surrounding streets.

Buying into the area back then was a sound investment. But, even as rates have significantly risen since then, it’s still a smart choice given its central location. And St Katharine’s Docks is also a huge drawcard. It’s only getting more popular for City and Canary Wharf workers wanting to spend their time away from the towering skyscrapers. The same is said for the rest of Wapping as people start to give it greater attention.

Wapping consists of a smattering of different kinds of properties. There are a huge chunk of warehouse conversions (much loved by the younger home buyers), a few renovated Victorian terraces and some new luxury developments too. The biggest of these developments comes in the form of London Dock. St George (as a part of Berkeley Homes) are constructing 1,800 new homes (including 486 ‘affordable’) in 10 blocks of between four and 26 storeys.

The scheme is arranged to provide seamless pedestrian access from St Katharine Docks through the revamped Thomas More Square to London Dock, and has six acres of green space and room for a new secondary school. Prices start at £1.27million for a two-bedroom flat. And the first residents have already moved in even though the entire project will not be completed until 2027. There’s still plenty of time to buy in – with the opportunity to nab some of the higher apartments with views across the river and City skyline.

Who’s buying into the area?

People living in Wapping have always come from a varied background, both in income and cultural background, but young City of London workers have increasingly bought into the area. And, more specifically, young city professionals have been drawn to the area. The ease at getting to the Square Mile and the forever cool East London are big drawcards. As is the proximity to the Thames.

It’s also a popular spot for investors, as seen with the average property prices increasing by 15.73% according to Foxtons. Some parents – especially those who grew up in Wapping – choose to raise their families here but a lot of others move out further, meaning there are plenty of properties up on the market.

When talking about dining destinations in Wapping, you can’t not mention St Katharine Docks. This old marina is full of waterside pubs, restaurants and retail shops. Our favourite restaurant here is Dokke but we also love grabbing a few pints at The Dickens Inn. They even put on seasonal events, including Christmas carols, pop-up floating cinemas and big scavenger hunts. It’s the beating heart of Wapping.

This is a surprisingly well connected and centrally located part of London – foolishly overlooked for too long. The Wapping and Shadwell stations, in Zone 2, are on the Overground with trains to Canary Wharf. Shadwell is also on the DLR with trains going directly to Bank (perfect for City of London workers). The Cycle Superhighway also exists along Cable Street to Tower Gateway, making for safe journeys into the City by bike – for those active eco warriors out there.

There are so many hidden gems in Wapping. Wilton’s Music Hall (the oldest music hall in London) puts on countless theatre performances, comedy shows, and even the odd vintage market. The small institution is perfect for locals wanting to get their cultural fix. At Jamboree, in the Courtyard of Cable Street Studios across The Highway in Shadwell, there are also some regular cabaret and music nights focusing on jazz, folk and Americana tunes.

And, being so central, you’re not a long walk away from the Southbank or Tower Bridge where you’ll get the Tate Modern, Southbank Centre, Tobacco Dock, Tower of London and the Globe Theatre. And, while you’re out walking, get along the Thames path for casual views and access to even more hot spots up by Limehouse.